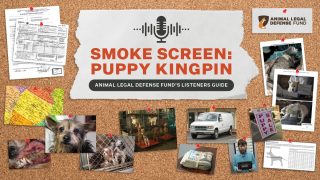 Follow the Animal Legal Defense Fund’s legal work and lawsuits, with access to some of the evidence, previous lawsuits, and related topics. Our graphics, straight from court filings, will help you visualize the laundering process and the lengths some breeders will go to conceal the origin of the puppies.

Listen along and learn more about the issues covered in the podcast — as well as how you can get involved in the fight against puppy mill cruelty — in our episode-by-episode guide.

or wherever you listen to podcasts