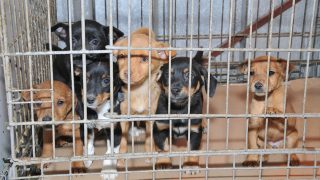 San Francisco, California – The Superior Court of the State of California has issued a critical ruling that a lawsuit against the Animal Kingdom pet store and two sham “rescue groups,” Bark Adoptions and Rescue Pets Iowa, can move forward. The lawsuit alleges the companies engaged in an illegal puppy laundering scheme in an attempt to unlawfully circumvent a California “retail pet sales ban.” The ban, which went into effect in January, seeks to stanch the inflow of dogs from commercial breeders — commonly called puppy mills — and requires pet stores to obtain animals from public animal control agencies, animal shelters, or legitimate rescue groups.

The lawsuit — filed by the Animal Legal Defense Fund, the nation’s preeminent legal advocacy organization for animals, on behalf of Bailing Out Benji and a corporation for the prevention of cruelty to animals — alleges pet store Animal Kingdom has been selling puppies who were commercially bred for profit by working with sham rescue entities to transport the puppies into California as “rescued” animals. In particular, the lawsuit alleges Bark Adoptions obtained puppies from Rescue Pets Iowa, which operates as a front for puppy mills – and Bark Adoptions then passed the dogs along to Animal Kingdom to sell to unsuspecting consumers.

In the new ruling, the court denied Bark Adoptions’ and Rescue Pets Iowa’s attempts to dismiss the lawsuit against them. The court also ruled the plaintiffs can seek both monetary civil penalties and injunctive relief against Animal Kingdom, Bark Adoptions, and Rescue Pets Iowa. Animal Kingdom’s motion to dismiss the claims against it was previously denied.

“The goal of puppy mills is to produce the largest number of puppies as quickly as possible, without consideration of injuries — many caused by inbreeding — or the care and well-being of the animals,” says Animal Legal Defense Fund Executive Director Stephen Wells. “These companies engaged in unfair business practices by deliberately misleading consumers that the dogs they purchased were rescues.”

At puppy mills, dogs are generally kept in crowded, unsanitary conditions. They often lack good food, clean water, and veterinary care. The mother “breeder” dogs may give birth to multiple litters per year throughout their adult lives. They, and aging father dogs, will regularly be abandoned or killed when they are no longer “useful” to their breeders.

“This should send a strong message to other businesses that might be thinking about deceiving the public and attempting to sell puppy mill puppies where the law prevents it,” says Mindi Callison, Executive Director of Bailing Out Benji.

California was the first state to pass a retail pet sales ban in 2017, with Maryland following in 2018. Many major cities in other states have instituted similar laws, including Chicago, Atlanta, and Philadelphia.