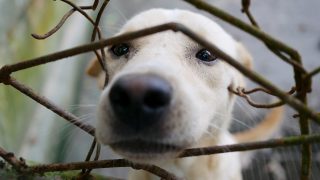 The law, which went into effect on January 1, 2019, requires pet stores to obtain animals only from public animal control agencies, animal shelters, or federally registered 501(c)(3) rescue groups that do not obtain animals from breeders or brokers for compensation.

Despite the ban, Animal Kingdom has continued to sell 8-week-old purebred and designer puppies for over $2,000 into 2019. The store identifies the source of these puppies as Bark Adoptions, a newly formed group — that incorporated in November 2018 and filed its registration for state nonprofit status on January 18, 2019. According to the IRS website, Bark Adoptions is not a federally registered 501(c)(3) nonprofit.

The Animal Legal Defense Fund’s lawsuit, filed on behalf of nonprofit organizations Bailing Out Benji and a corporation for the prevention of cruelty to animals, alleges Animal Kingdom is circumventing the law and misleading consumers by using Bark Adoptions as a middleman to launder puppies commercially bred for profit and labeling them “rescue” animals. The lawsuit alleges that Bark Adoptions obtains puppies from Rescue Pets Iowa based in Ottumwa, Iowa.

California was the first state to pass a pet retail sale ban in 2017, with Maryland following in 2018. Many major cities have instituted similar laws, including Chicago, Los Angeles and Philadelphia.