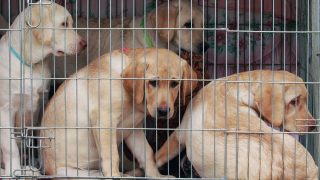 Amend the AWA to increase USDA enforcement of violations

In less than two years, Daniel Gingerich — a puppy mill breeder in Iowa — amassed approximately 190 Animal Welfare Act (AWA) violations noted in U.S. Department of Agriculture (USDA) inspection reports. One violation pertained to a golden retriever known only as #142. She was identified by USDA investigators as emaciated and in need of immediate care in April 2021 — but was left on the property. When the investigators returned to the puppy mill in July 2021, Gingerich attempted to hide the dog known as #142 — but the investigators found her. Due to her emaciated condition, she had to be euthanized by investigators. Investigators allege Gingerich failed to comply with the order to provide adequate veterinary care for the dog.

This information was only revealed in September 2021 after the Department of Justice (DOJ) filed a civil suit against Gingerich for violating the AWA. During the subsequent legal proceedings Gingerich’s USDA licensed was invalidated, some dogs were sold at auction — and the remaining 500+ dogs were rescued, and he plead guilty to two counts of animal cruelty.

Lawmakers and the public were distressed that the USDA had not removed animals who were suffering during the April 2021 inspection. Democratic Representative Cindy Axne (IA-03) gave #142 some dignity in death by naming the golden retriever Goldie and, in partnership with five other bipartisan lawmakers, introduced Goldie’s Act (H.B. 6100). The bill would amend the AWA to require the USDA enforce strengthened regulations set forth in the proposed bill.

Goldie’s Act would require the USDA to: