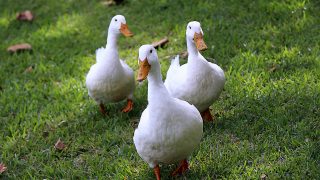 SAN FRANCISCO – Today, a long-running lawsuit against Napa restaurant La Toque concluded, with the restaurant promising in court filings to never again sell foie gras in violation of a statewide ban on the sale of this cruelly-produced “gourmet” delicacy. Foie gras is made by force-feeding ducks and geese massive quantities of grain, then slaughtering them for their diseased, enlarged livers.

While the case against La Toque has concluded, this is not the end of the Animal Legal Defense Fund’s commitment to ensuring California law is followed. The organization continues to pursue enforcement against any restaurant or seller violating the foie gras ban.

“Ducks and geese suffer immensely to produce foie gras. That’s why California prohibits the production and sale of this abusive product,” says Animal Legal Defense Fund Executive Director Stephen Wells. “Thanks to our lawsuit, La Toque vowed to cease illegal foie gras sales — and we will continue to hold accountable any other seller that flouts the law.”

California’s ban, which went into effect in 2012, was spurred by evidence of force-fed ducks in Sonoma, California, who were fattened so inhumanely they could not escape being eaten alive by rats in dark, filthy pens.

The California law faced a seven-year legal challenge by foie gras producers and sellers, in which the Animal Legal Defense Fund and fellow animal advocacy groups frequently filed briefs in defense of the landmark humane measure. In September 2017, the Ninth Circuit Court of Appeals upheld the constitutionality of the foie gras ban, and the U.S. Supreme Court denied the industry’s petition to review that holding in early 2019.

Anyone who sees foie gras in California restaurants or stores should report the illegal sale to the police, and submit details to the Animal Legal Defense Fund via this online tip portal: aldf.org/reportfoiegras.