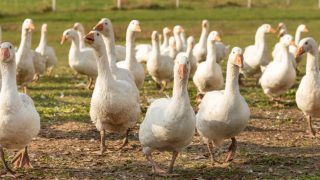 Restaurants and Retailers Warned Against Illegal Sales of Foie Gras

SAN FRANCISCO—The Animal Legal Defense Fund, the preeminent legal advocacy organization for animals, sent cease and desist notices to California restaurants and retailers that appear to continue selling foie gras despite a state ban on the sale of this cruelly-produced “gourmet” delicacy made from the liver of a duck or goose.

Over the past two months, the Animal Legal Defense Fund has received dozens of tips and reports from concerned citizens identifying California restaurants and retailers that appear to be flouting the foie gras law. Many reports were submitted via an online tip portal: aldf.org/reportfoiegras. The organization is now investigating these suspected violators and is in contact with law enforcement and encouraging them to take action. Violators are subject to fines of up to $1,000 per sale and up to $1,000 per day the violation continues.

The Animal Legal Defense Fund sent letters to the following restaurants, that, among others, it has reason to believe may be selling foie gras in violation of the ban:

Foie gras is produced by force-feeding ducks and geese to enlarge their livers eight or more times their natural size, inducing hepatic lipidosis, a painful and often fatal disease. California is the first state to pass a ban on the production and sale of foie gras. The law went into effect in 2012, and immediately faced legal challenges by restaurateurs and manufacturers. In 2015, the foie gras ban’s enforcement was halted by a federal court decision, but that decision was overturned in 2017 by the Ninth Circuit Court of Appeals.

In January 2019, the Supreme Court denied the foie gras industry’s latest petition attacking the constitutionality of the foie gras ban, once again prohibiting the cruel product from being sold in the Golden State.

The cease and desist notices sent by the Animal Legal Defense Fund warn restaurants against trying to thwart the law through gimmicks like “giveaways” of foie gras to paying customers, which the California Court of Appeals has already held constitute unlawful sales. That Court of Appeals decision is the result of the Animal Legal Defense Fund’s lawsuit against a Napa-based restaurant found to be illegally selling foie gras, La Toque.