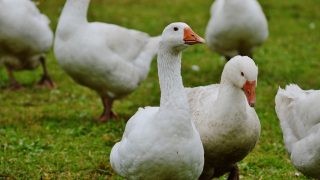 The Napa County Superior Court denied La Toque’s motion, agreed with Animal Legal Defense Fund that selling foie gras is not protected by First Amendment, and that serving it to paying customers constitutes a sale, not a gift. La Toque appealed the court’s decision, which is the subject of tomorrow’s hearing.

Foie gras is made by force-feeding young ducks until their livers balloon eight or more times their natural size, then slaughtering them for these diseased livers. Evidence of force-fed ducks in Sonoma who were fattened so inhumanely they could not escape being eaten alive by rats in dark, filthy pens spurred the 2004 ban which went into effect in 2012.

Although a federal district court recently found the ban conflicts with a federal statute, Animal Legal Defense Fund is confident that decision will be reversed on appeal.

“La Toque’s repeated law-breaking contributed to the suffering of hundreds of thousands of birds,” said Stephen Wells, Animal Legal Defense Fund’s executive director. “The court has recognized that La Toque sold illegal and cruel products, despite La Toque’s absurd and arrogant claims, and we intend to ensure that those who violated this humane law are held accountable.”