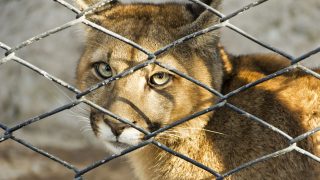 For years, captive wild animals have suffered in the care of traveling zoo operator Robert Sawmiller

During a 2010 inspection of traveling zoo operator Robert Sawmiller’s property, an inspector with the U.S. Department of Agriculture (USDA) observed a cougar lying motionless and in apparent distress. Sawmiller was directed to have the animal seen by a veterinarian within 24 hours. But, according to a USDA inspection report, the cougar “was left to succumb from its illness without pain relief or supportive care. The lack of appropriate veterinary care increased the unnecessary pain and suffering for the cougar.”

In a series of USDA inspection reports in the years following the cougar’s death, Sawmiller was cited numerous times for a variety of violations — many of which had a direct impact on the health and well-being of the animals, such as failure to provide clean drinking water or shelter from the elements. Sadly, the cougar was not the last captive wild animal to die in Sawmiller’s substandard care.

But on December 9, 2020, three of the surviving animals at Sawmiller’s Ohio facility were able to begin new lives at a sanctuary thanks to legal action brought by the Animal Legal Defense Fund.

A Pattern of Abuse

Sawmiller was a notorious traveling exhibitor and breeder of captive wildlife, who operated primarily under the name “Wildlife on Wheels.” He has been known to keep wild species such as bears, cougars, wolves, coyotes, foxes, and badgers, whom he has exhibited at events such as festivals, county fairs, and school programs. He has previously sold bear-cub photo opportunities — and he has even sold the cubs themselves. In the past, he kept big-cat species including tigers and a lynx, and he was one of several plaintiffs who filed suit in 2012 in an unsuccessful attempt to overturn Ohio’s law regulating wild animal possession.

Sawmiller has been cited numerous times by the USDA for his failure to provide adequate care and conditions for animals, maintain proper records, and obtain legally required permits. Over a multi-year period, USDA inspectors have cited Sawmiller for violations including:

On multiple occasions, Sawmiller has transported captive wildlife across state lines without securing a legally required permit. In some instances, he appears to have transported endangered species he obtained from roadside zoos without obtaining proper permits, which likely amounted to illegal wildlife trafficking.

For years, captive wild animals have suffered in the care of traveling zoo operator Robert Sawmiller. On December 9, 2020, two wolves and a Labrador named Fancy were rescued and transported to sanctuary through legal action brought by the Animal Legal Defense Fund.

Sawmiller has been known to collaborate with roadside zoos, including the Cricket Hollow Zoo in Iowa and the Olympic Game Farm in Washington state.

The Cricket Hollow Zoo is a facility with a long history of keeping animals in inhumane conditions. In 2018, the Animal Legal Defense Fund filed a lawsuit against the zoo and its owners on behalf of concerned local residents. The judge in the case ordered that all wild animals at the zoo be relinquished and sent to reputable sanctuaries and rescue organizations, and the zoo’s owners were “enjoined from ownership of exotic animals or wildlife.” However, more than 100 animals — including bears, mountain lions, a camel, a wolf hybrid, and a fennec fox — went missing from the zoo before the rescue could take place. The Animal Legal Defense Fund moved for a contempt order, and the case is ongoing. It is believed that five bears who were transported to Sawmiller’s facility around the same time, apparently without a permit, are the same bears who disappeared from the Cricket Hollow Zoo. Sawmiller told a USDA inspector that two of the bears died from “transportation stress” during the journey. Because the bears are believed to have been grizzlies, a protected species, their deaths likely represent a violation of the federal Endangered Species Act.

The Olympic Game Farm is a roadside zoo where captive wildlife including lions, tigers, and wolves are kept in substandard conditions and care. The Animal Legal Defense Fund has challenged the Olympic Game Farm’s inadequate care and treatment of animals, filing a lawsuit against the zoo in 2018. One of the wolves at Sawmiller’s facility, a female gray wolf named Elbey, was loaned to Sawmiller by the Olympic Game Farm for “breeding purposes.”

Sawmiller’s violations of animal protection laws have been both egregious and frequent. For the animals involved, the situation was a matter of life and death. Animals have been injured and died in Sawmiller’s care as a result of unsafe conditions, failure to provide proper veterinary treatment, and excessive animal stress.

Beyond the deaths of the cougar who was denied timely veterinary care and the two bears who reportedly died during transit, other known incidents of serious animal injury and death under Sawmiller’s care include:

Sawmiller was also cited by the USDA for a Repeat Violation for his failure to maintain records on the deaths of animals, including a coyote, a North American badger, and two bears. Indeed, several animals died in Sawmiller’s care without him providing any explanation at all for their causes of death.

A Patchwork System That Enables Abuse

Inconsistent state laws governing the possession of wild animals, combined with lax enforcement of the federal Animal Welfare Act and Endangered Species Act, have allowed operations like Sawmiller’s to proliferate in the U.S. These facilities aren’t just dangerous to the animals kept in them, but to unsuspecting customers and neighbors as well. Captive wild animals can transmit zoonotic diseases, cause injuries through bites or scratches, and endanger local communities if they escape inadequate enclosures.

The Animal Welfare Act is the primary federal animal protection law; it directs the Secretary of Agriculture to set minimum standards regarding the “handling, care, treatment, and transportation” of certain animals, including those kept in zoos and traveling exhibitions. The Endangered Species Act is a federal law that protects certain animal and plant species that are threatened or endangered with extinction. Notably, at least grizzly bears, one of the species kept by Sawmiller, are protected under the Endangered Species Act.

Traveling animal exhibitors like Sawmiller, as well as roadside zoos like Cricket Hollow and the Olympic Game Farm, are required to maintain exhibitor licenses under the Animal Welfare Act. Unfortunately, the USDA commonly rubber-stamps license renewal applications, even when its own inspectors have documented significant violations. For years, this was the case for Sawmiller — but when his license expired in 2020, he failed to apply for a renewal, meaning that he is no longer legally allowed to exhibit captive wild animals.

Animals frequently suffer from inhumane conditions and substandard care at facilities like Sawmiller’s. The Animal Legal Defense Fund is committed to using the power of the legal system to protect captive wild animals from abuse and ensure that laws governing their care are properly enforced.

You can join the fight to protect captive wild animals by boycotting businesses such as traveling and roadside zoos that profit from cruelty; speaking out against inhumane animal attractions, such as by writing a letter to the editor or posting on social media; and urging your elected officials to support animal-friendly legislation, such as the Big Cat Public Safety Act, a bill endorsed by the Animal Legal Defense Fund that was approved by the U.S. House of Representatives in December 2020 and currently awaits a vote in the U.S. Senate.