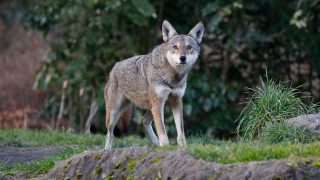 Reward for information leading to the arrest and conviction of the person or people responsible for illegally shooting and killing a red wolf in Tyrrell County, North Carolina.

RALEIGH, N.C. —The Animal Legal Defense Fund, the nation’s preeminent legal advocacy organization for animals, is offering an additional $5,000 reward for information leading to the arrest and conviction of the person or people responsible for shooting and killing a federally protected, endangered red wolf. The shooting led to the rare wolf’s collapse, which experts believe led to the wolf likely drowning in mud, on April 15, 2022.

“Killing a red wolf is not only tragic for the species’ survival in the wild, but any red wolf’s death also decreases the species’ ability to help the surrounding ecosystem return to a healthy equilibrium,” says Animal Legal Defense Fund Executive Director Stephen Wells. “Red wolves need as much protection — and enforcement — as possible by federal and state agencies, otherwise wild populations will cease to exist in a very short time.”

The Animal Legal Defense Fund joins the USFWS, which is also offering a $5,000 reward for information that leads to the case’s successful prosecution. With additional organizations offering independent rewards, the grand total has risen to $22,500.

The red wolf is currently listed as an endangered species and protected by the federal Endangered Species Act. Intentionally killing of a red wolf — that is not associated with self-protection, protecting livestock, or protecting companion animals — is a federal crime, with a maximum penalty of up to one year imprisonment or a maximum fine of $50,000, or both.

If you have information related to this incident, please contact North Carolina Division of Refuge Law Enforcement Patrol Captain Frank Simms at 252-216-7504 or Special Agent Jason Keith at 919-856-4786 ext. 34.