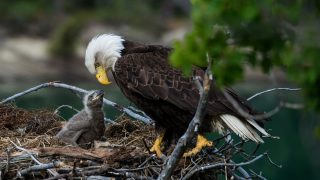 WASHINGTON, D.C. — The U.S. District Court for the Northern District of California has ruled in favor of the Animal Legal Defense Fund following its lawsuit to vacate rules imposed by the U.S. Department of the Interior in August 2019 under the Trump administration that weakened the Endangered Species Act (ESA). In October 2019, the Animal Legal Defense Fund filed a lawsuit challenging the rules on the basis that they failed to protect both wild and captive qualifying animals as required by the Endangered Species Act. The case was stayed while the current administration determined a course of action for revising the rules. In October 2021, the case resumed and proceeded to summary judgment, which led to the Court’s decision to reverse the rules during the government’s review.

“By design, the Endangered Species Act puts animals’ protection over corporate and industry interests — and the 2019 rules clearly violated that principle and the law’s intended purpose,” says Animal Legal Defense Fund Executive Director Stephen Wells. “The Endangered Species Act is one of few federal laws that protects animals and is critical for providing enforcement options through the civil court system.”

In August 2019, the U.S. Fish and Wildlife Service (FWS) and the National Marine Fisheries Service (NMFS) announced the new rules that weakened the ESA. The changes included:

As one of the most important legal tools protecting threatened and endangered animals, the ESA has prevented the extinction of numerous iconic American species including the northern gray wolf, the bald eagle, the Florida manatee, and the grizzly bear.

This law also provides critical protections for threatened and endangered animals languishing in captivity across the United States. The Animal Legal Defense Fund set a critical legal precedent applying the ESA to captive endangered animals in 2016 — affirmed on appeal in 2018 — regarding the treatment of four tigers and three lemurs held at a roadside zoo in Iowa in conditions that further endangered them.