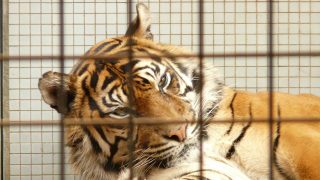 The district court relied on an extensive record including expert witnesses, admissions from the owners of Cricket Hollow Zoo and U.S. Department of Agriculture inspection records documenting dozens of serious violations including filthy enclosures and inadequate veterinary care. The district court also prohibited the defendants from obtaining endangered animals in the future unless they demonstrate they can provide proper care.

In addition to the severe mental and physical suffering endured by the roadside zoo’s endangered animals, the entire facility failed to meet the minimal standards of the Animal Welfare Act. After several lawsuits and challenges by the Animal Legal Defense Fund, the U.S. Department of Agriculture revoked Cricket Hollow’s license and issued a $10,000 fine against the owners in December 2017.

Unfortunately, Cricket Hollow Zoo is only one of many roadside zoos across the country that fail to provide suitable environments for endangered animals. The Animal Legal Defense Fund files lawsuits against roadside zoos and other attractions that do not meet the standards of care required by the Animal Welfare Act and Endangered Species Act.