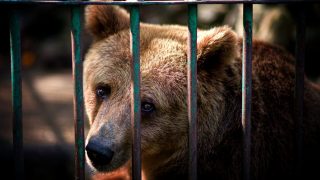 DES MOINES, Iowa – An Iowa roadside zoo’s long history of keeping animals in cruel and inhumane conditions is coming to an end.

The Animal Legal Defense Fund will assist in transferring animals from Cricket Hollow Zoo in Manchester, Iowa, to reputable sanctuaries and rescues for rehabilitation. The zoo’s owners have also been barred from owning any exotic animals or wildlife now and in the future.

In the decision, the court stated:

“The testimony and exhibits provided a picture of exotic animals that are left to eat and defecate in the same areas where they live. Many, if not all of the animals do not have a clean water source constantly available to them. Proper sustenance that is not contaminated is also not provided. These issues are systemic. There is no effort on the part of the Sellners to modify any of their husbandry practices to provide for a better environment for the animals. The Sellners have shown no interest in rectifying problems by hiring informed staff, retaining a properly trained veterinarians and maintaining proper shelter.”

Observers have documented animals — including bears, raccoons, angora rabbits, cougars, a camel, and a llama — kept in cages with rotten food, feces, and dirty, standing water. Baboons, who are intelligent, social animals and naturally live in troops of around 50, are kept in isolation at the zoo. One baboon named Obi was confined alone after being taken away from his mother and died after repeatedly banging his head against his enclosure — a clear indication of distress. Visitors report seeing a capuchin monkey named Cynthia similarly distressed, constantly biting her tail and pulling out her hair. On multiple occasions, Cricket Hollow Zoo even left live animals trapped in their cages with the decomposing bodies of other animals.

Prior to today’s victory, Judge Wittig said in open court that she gagged on the “horrible stench” while touring the zoo for a judicial site inspection, as part of the proceedings in this case.

In a previous lawsuit against Cricket Hollow Zoo, the Animal Legal Defense Fund set a critical legal precedent: That the Endangered Species Act applies to listed species in captivity, as well as those in the wild. That lawsuit, decided in 2016 by the U.S. District Court for the Northern District of Iowa and affirmed by a three-judge panel of the Eighth Circuit in 2018, concerned the treatment of four tigers and three lemurs. An additional Animal Legal Defense Fund lawsuit filed in 2016 against Cricket Hollow Zoo resulted in the rescue of two African lionesses — Jonwah and Njjarra.