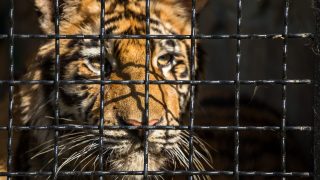 As part of its motion, on June 1 the Animal Legal Defense Fund submitted extensive evidence to the Court of ongoing mental and physical suffering to endangered tigers, lemurs, and gray wolves exhibited at the zoo. The Animal Legal Defense Fund supported its claims with USDA inspection reports and photographs that were developed to document chronic violations of the Animal Welfare Act.

According to the Animal Welfare Act, the USDA can suspend a license to operate an animal enterprise, such as the Cricket Hollow Zoo, “in any case of actual or threatened physical harm to animals” or if Animal and Plant Health Inspection Service (APHIS) has reason to believe that the licensee has violated or is violating the Animal Welfare Act.

“The Cricket Hollow Zoo has repeatedly failed to demonstrate that it is capable of complying with the Animal Welfare Act and the Endangered Species Act,” Animal Legal Defense Fund’s executive director Stephen Wells said.

“USDA’s decision to suspend its license is long overdue and only serves to bolster our bid to rescue endangered animals who continue to suffer and die there.”