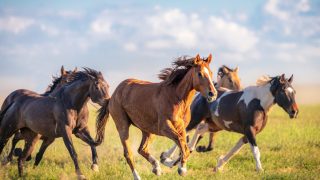 The Animal Legal Defense Fund’s National Justice for Animals Week is an annual event dedicated to raising public awareness around crimes committed against animals. This includes learning what criminal cruelty is under the law, and how we can all work to build stronger laws, prevent criminal cruelty, hold abusers accountable, and vindicate the interests of animal cruelty victims.

Each year’s event features suggested actions and a representative – an animal whose experience with the justice system helps illustrate the law’s power to do more for animals. The annual week of awareness is capped off with the announcement of America’s Top Animal Defenders – the list of prosecutors, judges, law enforcement officials, animal rescuers, lawmakers, animal legal advocates, and others who champion the cause of animal crime victims. 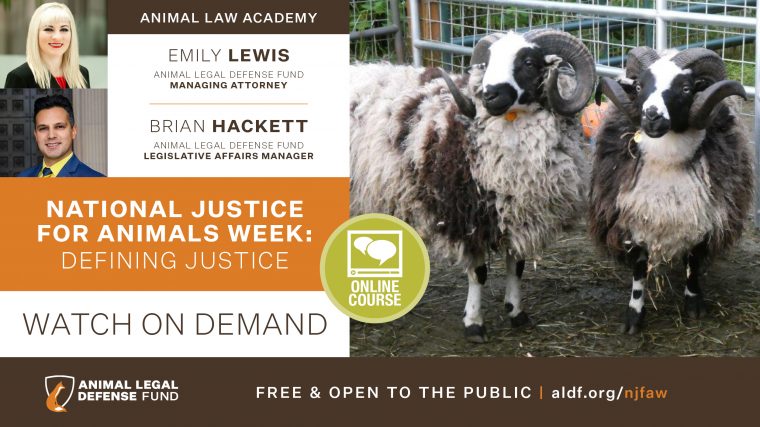 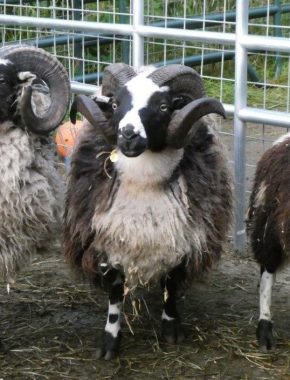 Sam the ram is the representative for the this year’s National Justice for Animals Week.

When a nonprofit animal rescue organization in rural Washington state learned of a large-scale neglect case, they leapt into action to bring the animals to safety.

Dozens of animals were lawfully seized by authorities and placed with the rescue as part of a criminal investigation — from sheep like Samuel to cats, cows, chickens, and more.

The sudden arrival of so many animals — many of whom had complex medical needs — flooded the rescue with additional costs for veterinary care, food, and other expenses. Some needed surgery; others arrived with untreated illnesses and infections. Many were emaciated. The Animal Legal Defense Fund provided grant funding that helped cover the cost of caring for these neglect victims.

Samuel was one of the animals in most extreme need. Malnourished prior to his rescue, Samuel was able to reach a healthy weight through proper care, nutritious food, and treatment for parasites.

Read the full story about Sam the ram and previous years’ representatives.

Here are actions you can take to raise awareness about animal crime victims.

Get Involved in National Justice for Animals Week!

How can Animal Legal Defense Fund Student Chapters get involved? Chapters are encouraged to host events to raise awareness about criminal justice issues in animal law, including how to report it, and how to work within your community to create stronger laws and ensure tough enforcement.

Stephanie Kendrick has been the public policy advocate at the Hawaiian Humane Society for five years following a successful career as a newspaper journalist. She has embraced the transition from unbiased observer to that of advocate, strategist, and relentless promoter of a mission unabashedly close to her heart. In 2021, Stephanie created a comprehensive state legislative campaign resulting in the passage of three significant animal protection bills; a ban on animal sex abuse, restrictions on dog tethering, and a bill to provide liability protection for veterinarians while requiring them to report suspected animal cruelty. All three bills became law in the summer of 2021. There is still much room for improvement in Hawaii’s animal laws and Stephanie is committed to building on this progress.

Susan Norris, DVM is a 2015 graduate from the College of Veterinary Medicine at the University of Illinois. She is working toward her Master’s in Veterinary Forensics at the University of Florida. She’s employed primarily as a general practitioner at Good Friends Animal Hospital in Urbana, but also as the county veterinarian in Champaign County.  Her passion is shelter medicine with a focus on helping abused and neglected animals. She believes her role as a veterinarian is critical in being a voice for those animals so that abusers are held accountable and monitored in the future. She lives with four rescue animals—dogs Pudge and Charlotte, and cats Poppy and Dwight—and her husband Jeff and two stepdaughters Riley and Olivia.

Assistant State’s Attorney Alyssa K. Rabulinski has dedicated her professional career to serving DuPage County in Wheaton, Illinois since 2014. During that time, she has fought tirelessly to obtain justice for victims of violent crimes. She currently works in a dual role as a senior assistant state’s attorney assigned to the gang unit and to the DuPage County Fire Investigative Task Force, which includes investigations into deadly fires, arsons, and explosive devices. Alyssa has also gained specific expertise in the area of holding animal cruelty perpetrators accountable for their crimes by advocating for victims of animal abuse in the investigation, charging, and prosecution of several high-profile crimes involving the abuse and neglect of animals. This includes the months-long investigation and charging of a deadly kennel fire in 2019 and two aggravated animal cruelty cases in 2020. In 2019, Alyssa adopted her rescued beagle, Finn.

Municipal Prosecutor Angela Roff works in many communities on the Western Slope/I-70 Corridor in Colorado. She has been a prosecutor since 2002 when she started her career in the United States Air Force as a JAG officer. Prior to moving back to Colorado, she served in Hampton, Virginia, and Tucson, Arizona. Angela was raised in the Alaska wilderness, surrounded by animals. It is her love for animals and tenaciousness as a prosecutor that translates to the successful prosecution of animal abuse cases in municipal court.

The Pennsylvania Society for the Prevention of Cruelty to Animals (PSPCA) has rescued animals from cruelty and neglect since 1867. The PSPCA rehabilitates animals medically and behaviorally, and places them with new, loving families. This is accomplished through the lifesaving efforts of our Humane Law Enforcement division, in-house shelter hospital, low-cost veterinary services, behavior and enrichment program, and humane education.

The Humane Law Enforcement program is the only operation of its kind in Philadelphia and across the 18 additional counties the PSPCA serves throughout Pennsylvania. Our officers enforce the cruelty laws of our state, providing high quality, compassionate care for the animals rescued and sheltered, with a responsiveness to community needs. The PSPCA’s extraordinary work benefits animals in need, pet parents, and residents throughout Pennsylvania.

Learn about the Top Defenders from previous years.