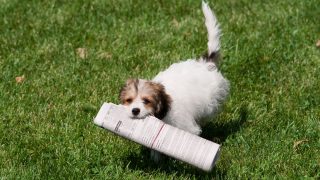 Writing Letters to the Editors

Letters to the editor are a powerful way to make your voice for animals heard within your larger community. These letters are one of the most widely-read sections of the newspaper. Elected officials often take notice of public opinion.

If there is an animal advocacy story that you think deserves more media attention, whether a success story or a sad case of abuse or neglect — or even if you want to applaud a reporter for her in-depth coverage of an animal story — a letter to the editor is the way to go.

Here is an example from Animal Legal Defense Fund Executive Director Stephen Wells, whose letter to the editor about the USDA’s secrecy and failure to regulate slaughterhouses appeared in a local paper.

EDITOR: As noted in Tuesday’s paper, the U.S. Department of Agriculture has refused to respond to reports of an intimate relationship between a USDA inspector and a Petaluma slaughterhouse employee (“Answers sought in Rancho closure”). Early this year, federal regulators ordered a nationwide recall of 8.7 million pounds of beef from the Rancho Feeding Corp., and they shut the facility down in February. Although Reps. Mike Thompson, D-St. Helena, and Jared Huffman, D-San Rafael, have called on the USDA to provide answers, the agency is using the cover of “pending investigation” to shroud itself in secrecy.

Unfortunately, the animal agriculture industry regularly colludes with government agencies including the USDA to hide operations from the public. Meanwhile, the understaffed USDA often fails to enforce the law, putting the public at grave risk. That’s why the Cotati-based Animal Legal Defense Fund, supported by a broad coalition of public interest groups, filed the nation’s first lawsuits against state “ag gag” laws (in Idaho and Utah) that silence whistleblowers on factory farms and slaughterhouses. The industry talks about transparency while shutting the public out at every opportunity. Taxpayers deserve some answers.

Notice how he starts out addressing the “Editor” and immediately links to the title of a recent article covered by that paper on his topic. He makes a connection with this topic and the work that the Animal Legal Defense Fund does for the benefit of animals and the community.

If your letter is published, share it with us! We will send you a prize-pack of Animal Legal Defense Fund goodies to help you keep spreading the word about our work to advocate for animals using the legal system. Email the published link to your letter to the editor to info@aldf.org or send a hard copy to the Animal Legal Defense Fund, 525 East Cotati Avenue, Cotati, CA 94931 Make sure to include your name, mailing address, and a copy of your published letter.