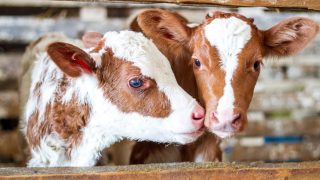 Each year, the Animal Legal Defense Fund provides resources to help its student chapters focus on a specific priority issue. The Student Chapter Program Guide contains an overview of the issue, the Animal Legal Defense Fund’s involvement, and suggested activities, such as film screening suggestions, a reading list, and suggested speakers. This year’s priority issue is Farmed Animals and the Law.

It is estimated that nine billion land animals are raised and killed for food every year in the U.S. We don’t even have an estimate for how many aquatic animals are killed in the U.S. every year, because the statistics kept are in tonnages, not individual beings. Many of these animals are subjected to near-unimaginable cruelty — much of which is perfectly legal, under current law.

Despite their vast numbers, and severity of abuse they suffer, farmed animals receive only minimal protections by our legal system. No federal laws govern the condition in which farmed animals are raised and most state anti-cruelty laws exempt farmed animals.

Farmed animals raised for the meat, dairy, and egg industries are among the most abused in the U.S. Investigations and industry whistleblowers have revealed abuses on farms and in slaughterhouses so horrific, most people cannot even bear to witness them.

Abuse takes place outside the law, but much of the cruelty consists of commonplace, legally sanctioned, standard industry practices.

The Animal Legal Defense Fund is working to change this. Farmed animals are every bit as capable of feeling pain and pleasure, as the animals who live with us as family members. We are fighting for stronger laws to protect farmed animals and better enforcement of those laws.

We have advocated for the protection of farmed animals in many ways, including:

To help fund your event, your chapter can apply for a project grant.

Encourage your school to add a farmed animal law course to the curriculum, or start a reading group. The Animal Legal Defense Fund offers a free Farmed Animal Law Course Guide and seed grants to support new classes. Contact us for a copy of the guide and for more information on the seed grants.

Host a speaker, debate, panel, or even a symposium or conference on Farmed Animals and the Law.

You also won’t want to miss the Animal Legal Defense Fund Student Convention on Friday, October 12, 2018! Join us for an opportunity to meet fellow student chapter members, receive career advice from leaders in the animal law field, and get inspired for the weekend ahead. Registration is free for law students.

Your student chapter can apply for a $1,500 travel grant to attend the Student Convention and the Animal Law Conference.

When planning a speaker panel or other event, we encourage you to look for opportunities to team up with other student groups. This will bring a wider audience to your event. Here are some groups and topics with cross-over potential:

Chapter members can write letters in response to any newspaper, magazine, or online article involving Farmed Animals and the Law.

At the administrative level, you can submit written comments to the U.S. Department of Agriculture, U.S. Fish and Wildlife Service, or other agencies when they are considering changes to rules and regulations. Stay up to date on new rules and comment periods.

Include news relating to Farmed Animals and the Law or your events on this issue in your chapter newsletters or emails. Check out the Animal Legal Defense Fund’s press room for the latest updates on our cases and campaigns.

For more tips on how to effectively contact your lawmakers, see this article from For All Animals.

Screen films related to Farmed Animals and the Law.

You can request an attorney from our Litigation, Criminal Justice, and Legislative Affairs Programs as a speaker for your event. To request an Animal Legal Defense Fund speaker, please submit the form at the bottom of this page.

Hold a chapter event to view an upcoming or recorded webinar from our Animal Law Academy, Animal Law Conference, or Animal Law Symposium.

Please note: non-Animal Legal Defense Fund speakers may require honoraria, which we do not fund.