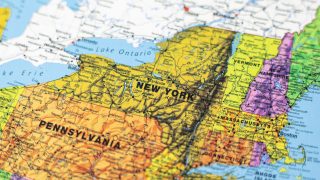 The Animal Protection Laws of New York compendium contains the general animal protection and related statutes for New York with an effective date on or before September 1, 2021.

S.1130/A.4283
The Puppy Mill Pipeline Act would prohibit the sale of puppies, kittens, and rabbits in retail stores.
Read More

The Carriage Horse Heat Relief Bill (Intro 1425)
The Animal Legal Defense Fund was a member of the coalition supporting Intro 1425 — prohibiting carriage horses from working when the heat index is 90 degrees Fahrenheit or above.
Read More

Banning the Sale of Foie Gras in New York City

Bans the sale or provision of certain force-fed poultry products (Intro 1378)
Bans the sale of foie gras — a cruelly-produced “gourmet” delicacy that comes from force-feeding young ducks and geese until their livers swell to up to eight times their natural size — in New York City.
Read More

CAARE v. SUNY
The Animal Legal Defense Fund filed a lawsuit to compel the disclosure of public records regarding invasive experiments on cats and kittens conducted by the State University of New York College of Optometry.
Read More

The Puppy Mill Pipeline Act (A.4283/S.1130) would shut down the puppy mill to pet store pipeline by prohibiting the sale of dogs, cats, and rabbits in retail stores.
Take Action