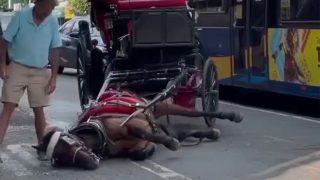 This action is for New York City residents only.

Make New York City the next city to ban the cruel and antiquated practice of horse-drawn carriage rides. Millions of people in New York and around the world have become attuned to the cruelty these horses endure after videos emerged of an elderly, emancipated horse named Ryder collapsing on the busy streets of New York City in August.

Sadly, Ryder died on October 17. The New York City Council can protect other horses from suffering by supporting Ryder’s Law (Intro 573) to phase out, ban, and replace horse-drawn carriages in the city.