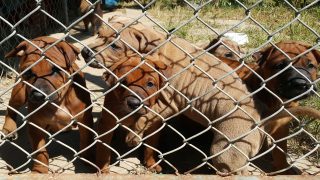 The Puppy Mill Pipeline Act would prohibit the sale of puppies, kittens, and rabbits in retail stores.

Update: On December 15, 2022, Governor Hochul signed the Puppy Mill Pipeline Act (S.1130/A.4283) into law! We are thankful to the bill sponsors, animal advocates, and partners who helped support this important New York bill.

Cities and states across the country are fighting back against puppy mills, large-scale commercial breeding facilities that maximize profits at the expense of the animals’ well-being, by enacting retail pet sale bans. These laws prohibit pet stores from selling certain animals sourced from mills.

The Puppy Mill Pipeline Act (S.1130/A.4283), sponsored by Assemblymember Linda B. Rosenthal (D-67) and Senator Michael Gianaris (D-12), would prohibit the sale of puppies, kittens, and rabbits in retail stores. If enacted, New York would become the fifth state in the nation — following California, Maryland, Maine, and Illinois — to pass a retail pet sale ban.

Animals in puppy mills endure severe cruelty and neglect. Crowded into small, dirty cages and deprived of companionship and love, mother dogs are forced to have multiple litters every year until they are too old to reproduce. Once they are no longer profitable, the dogs are usually killed or abandoned. Poor sanitation, little to no veterinary care, and inadequate and spoiled food are hallmarks of puppy mills. Retail pet sale bans help crack down on these cruel operations by reducing the demand for animals bred in mills.

Retail bans also protect consumers. Many families have been saddled with hundreds or thousands of dollars in veterinary bills caring for sick animals purchased from pet stores. Some of these animals ultimately die.

Learn how to pass a retail pet sale ban in your community.