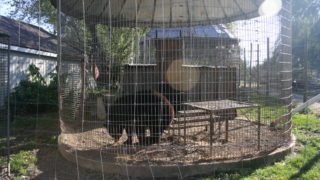 The judge imposed monetary fines totaling $70,000 or alternatively a jail sentence of 140 days

DES MOINES, Iowa — Today the Delaware County district court granted a motion for contempt filed by the Animal Legal Defense Fund against Cricket Hollow Zoo and its owners, Pamela and Thomas Sellner, seeking the whereabouts of more than 100 animals who “disappeared” prior to a court-ordered rescue.

In the contempt decision, the district court judge imposed monetary fines totaling $70,000 to be paid monthly at a rate of $1,000 or alternatively a jail sentence of 140 days. If the Sellners do not meet the payment deadline, the Animal Legal Defense Fund has the option of forgoing collection efforts move to initiate the jail term. The court gave the Sellners the opportunity to purge the contempt order by locating and returning the animals in coordination with the Animal Legal Defense Fund within 30 days at the Sellners’ expense.

“The judge’s decision holds the owners accountable for intentionally violating a court order that would have saved over 100 animals in 2019,” says Animal Legal Defense Fund Executive Director Stephen Wells. “We have been able to locate some of the animals removed — like the missing grizzly bears — and have confirmed that the surviving bears are with one of our sanctuary partners. We will continue our efforts to find the other missing animals and hope this ruling dissuades the wildlife trafficking community from attempting to hide animals in the future.”

The contempt decision follows a ruling from the Iowa Supreme Court on September 28, 2021, denying Pamela and Thomas Sellner’s petition for further review of a court-ordered rescue, which was upheld by the court of appeal on August 4, 2021. The district court originally ordered the rescue in 2019 after the Animal Legal Defense Fund proved at trial that Cricket Hollow Zoo was severely neglecting and mistreating animals. Following that trial, the zoo owners were “enjoined from ownership of exotic animals or wildlife” now and in the future.

The lawsuit, brought in 2018, alleged Cricket Hollow Zoo chronically violated Iowa’s public nuisance code because the zoos’ neglectful treatment of animals was unreasonably offensive to public morals and a risk to public health. The court found that the owners’ neglect of more than 300 animals had been well-documented over the past decade.

Many of the animals were nowhere to be found when rescuers arrived at the zoo on December 9, 2019, to move the animals to reputable sanctuaries and rescues. The missing animals included five grizzly bears, two mountain lions, one camel, one wolf hybrid, a fennec fox, opossums, coatimundis, several species of birds, snakes and reptiles, and more. Other animals that previously had been confined at the zoo, including llamas, ponies, and alpacas, had been released into an adjacent field, making it extremely difficult to locate and rescue exhibited animals. Even more animals, including rabbits, were hidden from view in the zoo owners’ barns and sheds.

When rescuers returned for a second rescue day on December, 12, 2019, they discovered that some animals who were subject to the court order had been returned to cages. These included two opossums, one coatimundi, eight sugar gliders, two macaws, three cockatiels, 10 parakeets, and one crested gecko. Cricket Hollow Zoo’s owners hid some of these animals off-property during the initial rescue in an attempt to prevent them from being rescued. Since December 2019, Cricket Hollow Zoo’s owners have continuously refused to disclose the location of the missing animals.

The Sellners’ attempts to contravene the rescue order did not go unaddressed by the district court. The contempt order noted “[t]he deception that was used to hide the animals was deliberate and with much planning. The deception enlisted others in the attempts to thwart the judicial process.” The order explained “[t]he [Sellners] cannot claim the November 24, 2019, order was confusing. Nothing in the order could be construed to lead the [Sellners] to believe they were permitted to retain, hide, exchange for any service or fee, dispose of, sell, give away or let die, any of the animals which were the subject of the Court’s order.”

Cricket Hollow Zoo is not an isolated case of animal abuse at a roadside zoo. These facilities continue to operate due to a patchwork of somewhat lenient state and federal laws, and lax enforcement of those laws. We will continue to work for stronger legal protection and enforcement for animals — and challenge individuals who keep animals in these types of cruel conditions.

A copy of the contempt motion is available upon request.