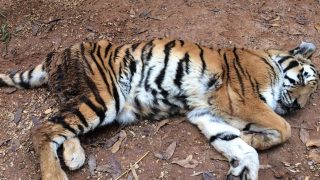 The lawsuit alleges federally endangered and threatened animals such as the tigers, lions, and ring-tailed lemurs are receiving inadequate care at Tiger Creek

DALLAS — The Animal Legal Defense Fund filed a lawsuit against the National Foundation for Rescued Animals, a purported animal rescue organization doing business as Tiger Creek Animal Sanctuary, as well as its founder and former director, Brian Werner Ferris, and his daughter, Chairman and Executive Director, Emily Owen, for allegedly violating the Endangered Species Act (ESA). Known as Tiger Creek, the facility, the Animal Legal Defense Fund argues, violates the ESA’s “take” and “transfer” provisions by harming, harassing, and killing numerous animals — including nine lions and tigers who have died there since 2018 — and by transferring members of endangered and threatened species across state lines without the necessary permits.

In the lawsuit, the Animal Legal Defense Fund alleges that extensive photographic and video evidence, first-hand observations, and government analyses — including an official warning issued by the U.S. Department of Agriculture (USDA) — indicate that animals at Tiger Creek believed to be protected by the ESA are mentally and physically suffering.

“The USDA has allowed Tiger Creek to continue to operate even though its inspectors have recognized the facility fails to meet minimum care requirements for animals,” says Animal Legal Defense Fund Executive Director Stephen Wells. “Our lawsuit seeks justice for the big cats who have lost their lives and to ensure the animals still remaining at Tiger Creek are transferred to reputable sanctuaries.”

Instances highlighting Tiger Creek’s lack of adequate animal care at its facility are detailed in USDA inspection reports and public records, which indicate that care has been withheld or delayed. Alleged victims include a puma named Coco who was euthanized days after he began dragging his leg around his enclosure and became immobile, a tiger named Amir who stopped eating and was found dead in his cage, a tiger named Greg who was euthanized after developing a distended abdomen and rejecting food, a tiger named Nati who had a cyst the size of a quarter in her abdomen that grew over multiple weeks to the size of a dinner plate before rupturing, and a tiger named Tibor who refused to eat after being transferred to Tiger Creek, where he ultimately died after spending hours in the rain, laying in his own urine. Tiger Creek is also alleged to be keeping two ESA-protected ring-tailed lemurs, highly social animals who typically live in groups, isolated in separate enclosures with insufficient opportunities for enrichment and social interaction.

The complaint also accuses Tiger Creek of violating the “transfer” provision of the ESA by failing to obtain applicable permits from the Secretary of Interior for its acquisition and transfer of endangered animals. For instance, in the past three years alone, Tiger Creek has allegedly acquired at least six protected animals out-of-state and transported them in interstate commerce. Tiger Creek is alleged to have acquired tigers Pomfret, Singer, and Nati in December 2018, and Ava, Elouise, and Rosie in July 2019, each from Doc Antle of Netflix’s Tiger King in Myrtle Beach, South Carolina.