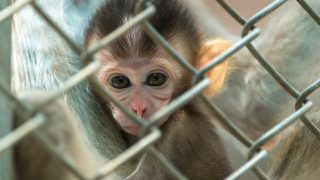 Documents produced by the University of Wisconsin during discovery demonstrate blatant censorship of debate and criticism of the university related to animal testing goes far beyond Krasno. Lists of automatically censored words and phrases for its Facebook and Instagram pages include: animal laboratories, testing on animals, primates, monkeys, cruelty, research animals, testing, kill animals, and torture.

“Public universities receive significant federal and state government funding and have a constitutional obligation to respect the public’s right to speak freely — especially when individuals are critical of how tax-dollars are being spent,” says Animal Legal Defense Fund Executive Director Stephen Wells. “Censoring truthful statements about animal testing and research that is carried out with public funds is illegal, and whistleblowers — like Krasno — are a critical component of exposing what takes place out of sight.”

As an animal lover, Krasno was inspired to study zoology at the University of Wisconsin, with the goal of working in the field of primate conservation. Seeking hands-on experience with primates, she worked as a student caretaker for primates at the school’s Harlow Center for Biological Psychology for approximately two years — an experience that exposed her to the harsh realities of animal testing.

When Krasno decided to voice her opinion about her experience on the school’s social media profiles, she realized her comments were not visible to the public. The lawsuit alleges Krasno has been silenced from advocating against animal testing on the University of Wisconsin’s social media profiles and prevented from posting truthful comments on posts because they are critical of the university’s sordid history of animal testing. As the University of Wisconsin is a public university, the complaint alleges the censorship of Krasno’s participation on its social media profiles violates her constitutional right to engage in protected speech.

In addition to the blocked words, documents and testimony produced by the University of Wisconsin in connection with the lawsuit revealed disturbing and blatantly discriminatory censorship practices. The university admitted that it intentionally censored words with the intent to hide comments made in connection with animal protection campaigns. Documents further revealed that university staff monitored Krasno’s social media account and discussed creating fake profiles to covertly attend one of her presentations. The university also admitted that its comment moderation is inconsistent and that there is no process to ensure regular oversight of moderation decisions such as blocking users and censoring new words.

“I use social media to share my personal experience regarding the inhumane treatment of primates confined in the University of Wisconsin’s research labs and to spark a dialogue about this important issue which I fear the public is not fully informed about — as the details are often kept hidden,” says Krasno. “The documents produced by the University of Wisconsin demonstrate its zealous efforts to silence criticism of its primate research labs and animal experimentation to suppress public conversation.”

While working with primates at the facility Krasno witnessed the victims of the university’s extensive animal testing. Krasno viewed firsthand a monkey who’d been subjected to an invasive cranial procedure that left an opening in his skull that was covered with a so-called “headcap,” who shook his cage bars and reached out his hands to grab in vain at passing humans. She witnessed a mother monkey and her newborn who screamed as they were separated so the newborn could be tattooed, an infant monkey who died in Krasno’s hands during a seizure, and a mother monkey who clutched her dead newborn for more than a full day until Krasno and a coworker were directed to separate her from the baby — a distressing experience that ended with the mother pressing her lips to the baby’s head before retreating alone into a transport cage. Her reactions to the experiences she had at the facility led Krasno to a later diagnosis of post-traumatic stress disorder.

Primate research conducted at the university’s Harlow Lab and Wisconsin National Primate Research Center has long been the subject of controversy. In 2014, the Animal Legal Defense Fund filed a lawsuit over the university’s failure to provide certain public records related to its inhumane and taxpayer-funded “maternal deprivation” tests, in which newborn monkeys were intentionally separated from their mothers to study the results on the newborns’ psychological development. In 2017, the Wisconsin Fourth District Court of Appeals ruled that the university needed to fully disclose records related to internal review of these taxpayer-funded experiments on infant monkeys. Most recently, in 2020, the U.S. Department of Agriculture (USDA) cited the University of Wisconsin for serial Animal Welfare Act (AWA) violations, including improper handling resulting in at least 20 incidents of nonhuman primates requiring amputation of body parts such as hands, feet, digits, and tongues.