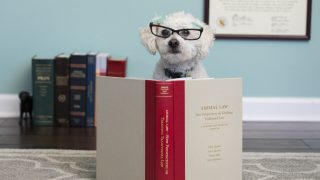 The book is available for purchase on Amazon or Carolina Academic Press. Professors may also purchase individual chapters in e-book format via RedShelf.

The Animal Law eJournal, sponsored by the Syracuse University College of Law, provides a forum for posting both completed works and works in progress on legal, policy, and jurisprudential issues relating to animals.

This is a student-run law review at Lewis & Clark Law School in Portland, Oregon. The review’s objective is to educate readers about  current animal-related legal issues.

This eJournal distributes working and accepted paper abstracts with an aim to promote and bring together the rapidly emerging scholarship focusing on the regulation of food.

The Global Journal of Animal Law is an open-access legal journal that welcomes all submissions addressing the legal status of animals. Submissions are accepted on a rolling basis.

The Journal of Animal and Natural Resource Law seeks to explore the legal and public policy issues surrounding animals at all levels of government: local, state, national, comparative national and international. All perspectives are welcome.

The Journal of International Wildlife Law & Policy addresses legal issues concerning the management of wildlife and their habitats.

The Journal is the official semi-annual publication of the WildCat Conservation Legal Aid Society. It provides a unique forum for professionals and scholars to analyze and comment on the issues affecting wildcats around the world, reflecting the perspectives of all disciplines including law, education, medicine, science, philosophy, religion, humanities, social science, and art.

An Introduction to Animals and the Law(2010) by Joan Schaffner

Animal Rights: What Everyone Needs to Know(2011) by Paul Waldau

Animals and the Law (2011) by Lesli Bisgould

Animals and the Law: A Sourcebook (2001) by Jordan Curnutt

Animals as Persons: Essays on the Abolition of Animal Exploitation (2009) by Gary Francione

A Worldview of Animal Law(2011) by Bruce A. Wagman & Matthew Liebman

Beyond the Law: Agribusiness and the Systemic Abuse of Animals Raised for Food or Food Production (1999) by David Wolfson

Canadian Perspectives on Animals and the Law (2005) Edited by Vaughan Black, Peter Sankoff and Katie Sykes

Dominion: The Power of Man, The Suffering of Animals, and the Call to Mercy(2002) by Matthew Scully

Drawing the Line: Science and the Case for Animal Rights (2003) by Steven Wise

Every Dog’s Legal Guide: A Must-Have Book for Your Owner (2005) by Mary Randolph

Get Political for Animals and Win the Laws They Need (2007) by Julie E. Lewin

In Defense of Animals: The Second Wave (2005) by Peter Singer

International Issues in Animal Law: The Impact of International Environmental and Economic Law upon Animal Interests and Advocacy (2012) by Peter L. Fitzgerald

Introduction to Animal Rights: Your Child or the Dog? (2000) by Gary Francione

Loving Animals: Toward a New Animal Advocacy (2013) by Kathy Rudy

Muzzling a Movement: The Effects of Anti-Terrorism Law, Money, and Politics on Animal Activism (2010) by Dara Lovitz

Ontario Society for the Prevention of Cruelty to Animals Act, Annotated(2008) by Jennifer Friedman

PETRIARCH: The Complete Guide to Financial and Legal Planning for a Pet’s Continued Care (2010) by Rachel Hirschfeld

Rattling the Cage: Towards Legal Rights for Animals (2011) by Steven Wise

What Can Animal Law Learn from Environmental Law? (2015) by Randall S. Abate

Why We Love Dogs, Eat Pigs, and Wear Cows: An Introduction to Carnism(2011) by Melanie Joy Ph.D.