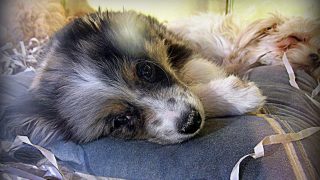 What is animal hoarding?

Hoarding is one of the most egregious forms of animal cruelty, affecting tens of thousands of animals – mostly cats and dogs – in communities nationwide. Hoarders keep abnormally large numbers of animals for whom they do not provide even the most basic care.

Animal victims of hoarders typically suffer horribly as a result, and, unlike most other forms of companion animal cruelty, their misery can go on for years. The sometimes hundreds of dog or cat victims of a single hoarder generally show signs of abuse such as severe malnutrition, untreated medical conditions including open sores, cancers, and advanced dental and eye diseases, and severe psychological distress.

How serious is the problem?

It is likely that up to a quarter million animals – 250,000 per year – are victims of hoarders. Recently, the number of reported hoarding cases has steadily increased.

In terms of the number of animals affected and the degree and duration of their suffering, hoarding is the number one animal cruelty crisis facing companion animals in communities throughout the country. Hoarding frequently endangers the health, safety and life of the hoarder as well as children and dependent adults who must live under the same conditions.

Who hoards animals and why?

As with other acts of animal cruelty, it may be impossible to know for sure what motivates the abuse and profound neglect inflicted by hoarders. We do know that 72% of hoarders are women and that the most common animal victims of hoarders are cats, followed by dogs.

Because recidivism rates for hoarders are almost 100%, the only long-term solution for stopping their behavior is to prevent them from owning animals, and to require mental health evaluations and treatment if necessary.

How does animal hoarding affect the local community?

In addition to the horrific animal cruelty involved, hoarding creates such highly unsanitary conditions that the properties of hoarders, contaminated with fecal matter and urine, may be condemned.

What’s more, a single hoarding case involving dozens if not hundreds of animals can easily bankrupt a local humane society or shelter, and severely strain volunteer resources, and the cost to local authorities and law enforcement officials remains ongoing.

What can be done from a legal standpoint to stop or prevent hoarding?

Hoarding is very difficult to prevent, but it may be addressed by holding the hoarder accountable.

There is a need for public education and for communities to know how to recognize the basic signs of hoarding: the keeping of abnormally large numbers of animals, the failure to provide proper nutrition, care, and a sanitary environment accompanied by evidence of serious neglect.

In the short term, neglected and abused animals need to be removed from a hoarder’s property, but only long term changes to animal law can address hoarding situations.

Why is animal hoarding so difficult to prosecute?

Courts can–and should–require convicted animal hoarders to undergo mental health evaluations, and treatment if necessary. This can address the root of the issue, dramatically reducing recidivism rates. It is important to do this through the criminal justice system, so that the court has the authority to enforce a future possession ban, and impose sanctions for failure to comply.

Furthermore, many states have heightened penalties for second or subsequent animal cruelty crimes. If a hoarding case is diverted out of the criminal system, there would be no way to apply these laws if the hoarder commits further animal cruelty.

Other reasons that animal hoarding cases are difficult to prosecute are that: most states have no legal definition for animal hoarding, courts already assign relatively low priority to animal abuse and neglect cases in general, and many people are unfamiliar with the severity of abuse in hoarding situations.

The high cost of caring for animals rescued from hoarders, who often must be cared for at the rescuer’s expense, is also a huge disincentive for prosecuting hoarding cases. These factors contribute to a lengthy and difficult legal process in securing a positive verdict in any case.

Have there been any notable successes in the fight against hoarding?

In the Woodley case cited above, there was clearly a victory in Sanford, North Carolina where that unique state law allowed any person or organization to sue an animal abuser. In April 2005, the judge granted an injunction allowing the Animal Legal Defense Fund and county authorities to remove more than 300 diseased, neglected and abused dogs from the home of a local couple.

Each of us can play an important role in stopping animal hoarding and getting the word out that this is not a victimless crime!

How to spot a hoarder:

What you can do to help: