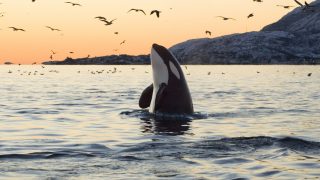 Phasing Out Orcas in Captivity

Would prohibit breeding captive orcas, prohibit the transport of orcas into Florida, and that any public displays must be strictly educational.

The 2020 Florida legislative session has ended. We look forward to advocating for orca protections in future sessions.

The Animal Legal Defense Fund, along with a coalition of animal protection, environmental, and marine conservation groups, is working to ensure that this generation of captive orcas in Florida is the last.

This legislation would make it illegal to hold orcas in captivity for any purpose (grandfathering those already in captivity in Florida), breed captive orcas, and transport captive orcas into Florida or out of North America, unless provided by federal law or to rehome to sanctuary. Moreover, the legislation would guarantee that those orcas already held in captivity in Florida would only be held for research or rehabilitation purposes and that any public displays must be strictly educational.

Additionally, the legislation would require that orcas held for rehabilitation or research purposes be returned to the wild whenever possible.

Even SeaWorld Orlando’s largest tank is just a glorified swimming pool. For an orca who can swim up to 140 miles a day and dive hundreds of feet deep, life in captivity is extreme confinement. If you’ve ever felt a sense of the great vastness of the ocean, it is truly to chilling to consider the life of a wild orca versus that of one in captivity. An orca in a tank is often compared to a human living in a bathtub.

Over the years, tireless education and advocacy campaigns have shined a light on the terrible cruelty of holding orcas in captivity, including many behavioral markers of extreme stress, physical injury, violence, and lifespans decades shorter than those of wild orcas. The stories of orcas who injure or kill trainers always make the headlines, but the tragedies never shock orca experts.

Everything we know about holding orcas in captivity tells us to expect nothing less from huge, intelligent creatures held in torturous conditions.

Thanks to Representative Jared Moskowitz, a bill was filed for the 2018 legislative session as HB 1305 but was not passed. While there is no stand-alone bill protecting orcas this session, legislators can still add language to related bills.

Companies Can Break a Promise, Not a Law

The past few years have seen incredible, promising change in public opinion. The public knows now more than ever that captive orcas are suffering orcas, and SeaWorld has never been less popular. Changing sentiment coupled with our tenacious legal efforts, and well as those of other organizations, brought about SeaWorld’s historic announcement that it would end captive breeding of orcas and phase out its program forcing the orcas to perform.

To save countless orcas from suffering through a life in captivity, the Animal Legal Defense Fund, along with a coalition of animal protection, environmental, and marine conservation groups are proposing critical legislation that would codify SeaWorld’s promises.

With the death of Tilikum in January 2017, and the continued plight of Lolita, an orca who was captured in 1970 and lives alone in a small tank in Miami, it’s critical that this law be passed now so no additional orcas experience a similar fate.

We need your help to make sure lawmakers know protection for orcas is a priority issue for Floridians! Keep an eye on this page and follow our Facebook page and the Florida Orca Protection Act Facebook page for the latest news!

The Animal Legal Defense Fund is asking Florida residents to contact their representatives in both the Florida House and Senate to demand protection for orcas as a legislative priority.

Click on the action alert below to send a message. After taking action, send your legislators a tweet to make sure they realize Floridians care about orcas! You can use this sample message:

As your constituent and a Floridian, I want to make sure that you are aware of the need for legal protections for orcas in the state. Let’s make this the last generation of orcas kept to suffer a life in captivity. aldf.org/fopa #emptythetanks

While you’re rallying support for this legislation, some fellow Floridians may have some questions.

Be prepared by reviewing these talking points that can help you explain why this legislation is so important.

Also like the California law, the Florida legislation will require that orcas held for rehabilitation or research purposes be returned to the wild whenever possible; no orca may be used for breeding, performance, or entertainment even if reintroduction to the wild is impossible.

The legislation is uncontroversial: it merely codifies SeaWorld’s corporate policy:

SeaWorld’s lobbyist has insisted that the Florida effort is “offensive” to SeaWorld and might jeopardize the recovery of their stock value, exhibiting a misplaced and illogical concern that codifying corporate policy in another state’s law will harm the company when hypocrisy is the far greater risk.

The California bill enjoyed broad support, as has the proposed Florida legislation:

SeaWorld is not the only entity in Florida housing orcas.