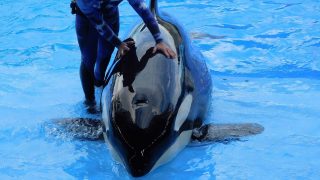 The Animal Legal Defense Fund is saddened yet unsurprised to learn that Tilikum, an orca held at SeaWorld and subject of the documentary “Blackfish” has died at age 36. On average, death comes for captive orcas when they are 30-50 years old, compared to 60-70 for males in the wild. Tilikum garnered much media attention throughout his life, having been tied to three human deaths, most recently that of his trainer, 40-year-old Dawn Brancheau, who he pulled underwater in front of an audience. The violence that followed Tilikum is hardly unexpected; it’s the natural result of prolonged captivity in a glorified pool of a massive, highly intelligent animal. Tilikum was taken from the wild in 1983 and had already been involved in the death of one human when SeaWorld purchased him in 1991.

The good news is that the tragedy surrounding Tilikum’s captivity helped coalesce public sentiment around the idea that entertainment is no justification for the cruelty of captivity. The Animal Legal Defense Fund was able to maintain immense legal pressure on SeaWorld, helping lead to its historic decision to phase out its inhumane captive orca program. The Animal Legal Defense Fund will continue to use the legal system to liberate animals, including the remaining orcas in captivity. We are incredibly committed to the various legal actions pending on behalf of Lolita, an orca held at Miami Seaquarium in a tank that is far too small, where she has no shelter from the sun and hasn’t seen another orca for decades.