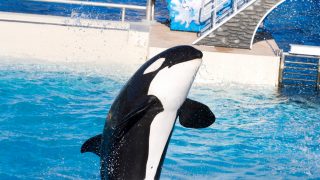 The Animal Legal Defense Fund grieves the death of Kayla, a 30-year-old orca whose death SeaWorld announced on Monday. And we renew our call for Florida and other states with captive orcas to pass and enact stronger orca protection laws.

“We mourn not just Kayla’s death, but that she never truly got to live. It’s not just a limited lifespan that makes captivity so cruel for orcas. They are among the smartest, most emotionally complex animals on earth. In the wild, they live in large, intricate societies, and may swim 140 miles every day,” says Animal Legal Defense Fund Executive Director Stephen Wells. “But in captivity, at SeaWorld, these animals are often kept alone or with little company in small tanks that are essentially glorified bathtubs. We need legislation that will protect other orcas from this cruel fate.”

SeaWorld said in a statement that Kayla began showing signs of declining health on Saturday, and that her health worsened on Sunday. Her death was announced on Monday. SeaWorld’s statement said the company doesn’t yet know what caused Kayla’s death, and won’t likely have that information for another few weeks.

Kayla lived her whole life in SeaWorld’s glorified bathtubs. She was born in captivity at SeaWorld San Antonio in 1988, where she spent 2.5 years before being moved to SeaWorld Ohio (which closed in 2000). Kayla was then moved back to San Antonio, where she was artificially inseminated and gave birth to a calf, Halyn, who died less than three years later.

Kayla was sent to SeaWorld Orlando in 2006 — where she’d spend the rest of her life, performing for an ever-dwindling number of tourists, as shows featuring captive orcas fell out of favor thanks in part to the 2013 film BlackFish, which helped cause public opinion to turn on SeaWorld and its mistreatment of orcas.

Nearly three years ago, in response to public demand, SeaWorld promised to end its orca breeding program and to phase out its orca shows. The orca shows are still occurring, though the company says they will end in 2019. There is no way, though, to enforce these promises and SeaWorld has dispatched lobbyists to defeat attempts to codify its voluntary commitments.

The Animal Legal Defense Fund has proposed the Florida Orca Protection Act, which would make it illegal to hold orcas in captivity for any purpose — grandfathering those already in captivity in Florida.

It would also be illegal to breed captive orcas, or to transport captive orcas into Florida or out of North America, unless provided by federal law or to rehome to sanctuary. Additionally, the bill would require that orcas held for rehabilitation or research purposes be returned to the wild whenever possible.

We need the Florida Orca Protection Act because Kayla deserved better than what she got: a short life in a small tank. Orcas are counting on us to make sure this generation of captive orcas is the last.