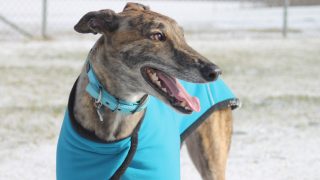 Wins for Animals in the 2018 Midterm Election

The recent midterm election included two big wins for animal protection. Voters in Florida approved Amendment 13, which will end greyhound racing in the state, and California voters approved Proposition 12 (“Prop 12”), which sets minimum space requirements for confining farmed animals. Prop 12 also bans the sale of products produced out of state that do not meet these modest requirements. Less favorably, North Carolina voters approved a constitutional amendment providing the right to hunt and fish; however this amendment make no changes to current law.

A ‘yes’ vote supported prohibiting wagering on live dog races, including greyhound races, held in Florida and banning dog races in Florida on which there is wagering.[1]

With the passage of Amendment 13, Florida has become the 41st state to ban commercial dog racing. This measure passed overwhelmingly with 69 percent of the vote.

The racing industry is inherently cruel, and Florida is home to its largest remaining sector. The passage of Amendment 13 means that by the end of 2020, the practice will be outlawed in Florida, shutting down two-thirds of the U.S. greyhound racing industry. Most of the state’s racing dogs will be able to retire and, equally important, Amendment 13’s passage will likely mean a drastic reduction in the number of dogs bred in the United States simply to feed the “sport” of greyhound racing. As we’ve noted:

“Thousands are bred annually — many more than are needed to race — in an attempt to create the fastest dogs. These social dogs are forced to spend most of their time alone, confined in rows of double-stacked, warehouse-style metal cages that are barely large enough for them to stand up or turn around in for 20-23 hours a day. Many racing dogs suffer injuries while racing and, according to state records, a racing greyhound dies on average every three days on a Florida track.”

And according to the New York Times:

“A 2015 report from the American Society for the Prevention of Cruelty to Animals and Grey2K found more than 11,000 greyhound injuries nationwide and more than 900 deaths between 2008 and 2015. Some are found dead in their cages, others sustain serious injuries while racing or are electrocuted while chasing a mechanical rabbit around the track. In Florida, nearly 500 greyhounds died since the state started tracking deaths in 2013.”

In the wake of Amendment 13’s passage, animal rescue groups are preparing to help thousands of greyhounds find homes as tracks shut down between now and the end of 2020.

According to the New York Times, however, unfortunately not all of these dogs will necessarily be adopted as companion animals; some may be transferred to racetracks in other states. Greyhound racing still exists in Arkansas, Alabama, Iowa, Texas, and West Virginia — and is also still legal in Connecticut, Kansas, Oregon, and Wisconsin, though these states do not now have any tracks.

With the closing of Florida’s 11 racetracks, there will be six tracks left among the five states where the tracks are still legal and active. In light of Florida’s ban, some say the racing industry nationwide may be too small to survive.

Amendment 13 survived a lawsuit to keep it off the November ballot. The lawsuit, which failed, was brought by the Florida Greyhound Association (FGA), an industry group dedicated to keeping greyhound racing legal. FGA’s lawsuit was based in language in the preamble to the amendment, which read: “The humane treatment of animals is a fundamental value of the people of the State of Florida.”

The humane treatment provision also spurred opposition from a coalition that included the Florida Farm Bureau, the National Rifle Association, and the Florida Cattlemen’s Association. The coalition invoked the timeworn “slippery slope” argument, claiming that this sentence would transcend the singular issue of greyhound racing and open the door to litigation regarding all manner of inhumane treatment of animals, potentially threatening activities like hunting, fishing, and farming.

In addition to the “humane treatment” provision, the lawsuit alleged the title and language of the initiative were misleading. A lower court found these arguments compelling and ruled Amendment 13 be removed from the ballot. However, in September 2018, the Florida Supreme Court reversed the lower court’s decision and ruled that Amendment 13 would remain on the ballot[2]. The Animal Legal Defense Fund filed an amicus brief in that case.

A “yes” vote supported this initiative to:

In what is being called the strongest law of its kind in the world, Proposition 12 outlaws the most extreme methods of confining farmed animals in California, and bans the sale of products produced in other states using these methods. Covered under this law are calves raised for veal, pregnant pigs, and egg-laying hens. The initiative passed easily with 61 percent of the vote and becomes effective in 2022.

Prevent Cruelty California, the ballot initiative committee spearheading the “Yes on 12” campaign, was launched by The Humane Society of the United States. The Animal Legal Defense Fund was part of the coalition that supported this campaign through building awareness and getting out the vote via messaging on social media and through our California student chapters.

Proposition 12, more colloquially known as Prop 12, comes a decade after the passage of Proposition 2, which made it illegal to confine the above mentioned animals in a manner that did not allow them to “turn around freely, lie down, stand up, and fully extend their limbs.” Prop 2 was passed in 2008 and took effect in 2015.

While Prop 2 was an important step forward, it lacked specific standards for the minimum amount of space that each animal must be provided under the law, other than the general guidelines mentioned above. Prop 12 provides that animals may not be “confined in a cruel manner,” which is further defined to subsume the previous language and includes additional specifications:

(e) “Confined in a cruel manner” means any one of the following acts:

Prop 2 also only applied to animals raised in California. However, Prop 12 goes further and bans the sale of animal products produced in other states in a manner that does not comply with California’s modest standards, making the law significantly stronger than its predecessor.[4]

Massachusetts voters overwhelmingly approved a similar law in 2016, the first to include a sales ban. However, unlike Massachusetts, California has a large agriculture industry — and is also the nation’s most populous state — so the impact will be more widespread.

Opponents of Prop 12 included the animal agriculture industry and at least one prominent animal rights group that opposed the measure because it did not go far enough. Although Prop 12 may now be the best legislation of its kind in the world, most animal advocates would like to see farmed animals treated much better than they will be even under this comparatively strong law.

However, at this time farmed animals are the most used animals in the world, routinely subject to abusive conditions but with the fewest legal protections. Animals in modern agriculture are treated more like machines than living, feeling beings. When standard industry practices — which affect billions of animals — include confining animals in cramped cages for the duration of their lives with barely room to move, let alone go outdoors or engage in natural behaviors, laws like this are a significant victory.

Many who supported Prop 12 see this as a milestone on the road to greater legal and social change, and are actively working for more and better protections for farmed animals.

In reflecting on this victory, it’s also important to note that the powerful animal agriculture industry routinely fights vigorously against attempts to pass animal protection legislation (sometimes even when the legislation does not apply specifically to farmed animals). Moreover, it actively works to pass laws that insulate and shield the industry’s cruelest practices.

These include Ag-Gag laws that seek to criminalize whistleblowing and investigations that expose abuse in animal agriculture, and to hide from the public the cruel manner in which animals raised for food are routinely treated.

The industry is also attempting to stifle competition from plant-based and slaughter-free meat products, with unconstitutional laws to regulate labels and manipulate the market in its favor.

For example, a recent law passed in Iowa forces supermarkets selling “specialty eggs”[5] to also sell conventional eggs (i.e. the products of hens confined in cruel cages – the conditions outlawed by Prop 12) if they participate in the supplemental federal program known as WIC.[6]

In this climate, the passage of Prop 12 is especially significant. The animal agriculture lobby enjoys a disproportionately strong voice in our legislatures, amplified by its considerable financial and political resources. But in this case the individual voices speaking together for farmed animals in California were louder.

Not all ballot initiatives were favorable to animals. North Carolina voters approved a constitutional amendment “protecting the right of the people to hunt, fish, and harvest wildlife.” Although it does not change any current state or local laws, according to the North Carolina Chapter of the National Association of Social Workers, one of the organizations which advised people to vote against the amendment:

“It gives greater weight to the right to hunt and fish by solidifying it in the constitution. This could potentially be used to challenge current restrictions in place that are intended to promote wildlife conservation.”

“Hunting and fishing rights are not in jeopardy and even legislators who voted for this bill agreed it is unnecessary. This amendment has unintended consequences that can harm our state’s wildlife by overruling sensible restrictions on trapping, poisoning and other cruel practices.”

With the passage of North Carolina’s amendment, 22 states have now enshrined the right to hunt and fish in their constitutions, and two states provide a right to fish but not to hunt.

We are so appreciative of everyone who cast a vote for animals this election, with a special note of gratitude to all the advocates on the ground who worked tirelessly on these campaigns — gathering signatures, knocking on doors, making phone calls, writing op-eds, supporting nonprofits, and all the other ways you got the word out in your communities. Thank you!

Animals are not voiceless, but they do lack a voice in our political system, so it’s up to us to make sure their interests are represented. For guidance on how to get stronger animal protection laws passed in your state or community, see our resource: Working with Legislators.

[2]The Circuit Court for the Second Judicial Circuit held that Amendment 13’s title and summary were “clearly and conclusively defective” and issued an injunction forbidding it from appearing on the November 2018 general election ballot. The Florida Supreme Court disagreed. On September 7, 2018, it reversed this judgment, vacated the injunction, and ordered Amendment 13 to appear on the ballot. On the sentence regarding humane treatment, the court held this provision was prefatory and did not have independent legal significance, further noting “it is well settled that the Florida Constitution permits the Legislature to impose civil and criminal penalties for inhumane treatment of animals.”

[5]Defined as eggs from hens housed in a cage-free, free-range, or enriched colony cage environment.

[6]The Special Supplemental Nutrition Program for Women, Infants, and Children.