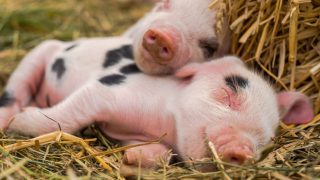 Wins for Animal Protection in the 2016 Election

While much of the nation’s focus has been riveted on the outcome of the recent presidential election, voters in a handful of states also decided important ballot measures related to animal protection last week. First, the good news.

Massachusetts voters overwhelmingly approved Question 3, An Act to Prevent Cruelty to Farm Animals, which bans the production and sale of products obtained from the extreme confinement of farmed animals. The bill not only prohibits confining farmed animals in cages so small they cannot comfortably stand up, lie down, turn around or move their limbs, but also goes further in banning the sale of meat and eggs resulting from these practices outside Massachusetts.

The confinement practices that will be prohibited in Massachusetts starting Jan. 1, 2022, include battery cages for egg-laying hens, veal crates for calves and gestation crates for pigs. Although only one farm in Massachusetts currently uses battery cages, and none use veal crates or gestation crates, the provision banning the sale of products resulting from these practices will have a greater impact.

So far, only California has passed a law banning the sale of eggs from hens kept in cages, and no state has banned the sale of meat products from confined animals.

This new legislation—which passed by a landslide with 78% in favor—is  stronger than any similar law in the U.S. and sends a clear message that people care about farmed animals. We can expect more challenges in the future to the egregious methods of animal confinement that have become standard in the agriculture industry.

Oklahoma voters rejected State Question 777, also known as the Right to Farm bill, which would have amended the state constitution to include farming and ranching rights. Adding guaranteed farming rights to the state constitution would have made it extremely difficult to pass any new regulations related to agriculture. The amendment would have required the courts to apply the same standards to lawsuits concerning agriculture and farmed animals that it does in those concerning free speech, gun ownership and religious freedom—thus making newer state restrictions and regulations vulnerable to lawsuits.

Despite the backing of powerful agriculture groups, Oklahoma voters decided not to grant the farming industry legal protection from future regulation.

In another positive development, Oregonians approved Measure 100, the Wildlife Trafficking Prevention Act, which bans the sale of animal parts from 12 endangered species to thwart illegal poaching. It passed by a wide margin.

The U.S. is now the second largest market for illegal wildlife products and Oregon joins several states that have recently enacted legislation to curtail trafficking, including New York, New Jersey, California, Washington and Hawaii. At the federal level, last month President Obama signed into law H.R. 2494, the Eliminate, Neutralize, and Disrupt (END) Wildlife Trafficking Act of 2016, which provides tools to help the U.S. lead efforts to combat the global poaching crisis and work with partner nations to protect elephants, rhinos and members of other endangered and threatened species from being victimized by the international trafficking trade.

And in California, voters rejected Proposition 67, affirming a ban on plastic bags. Plastic bags are a significant cause of death for marine animals. After San Francisco became the first jurisdiction to ban single use plastic bags in 2007, California followed in 2015 with the nation’s first statewide ban. Proposition 67, put on the ballot by a coalition of plastic bag companies, would have overturned the ban.

Unfortunately, not all of the news was positive for animals. Montanans voted down the Montana Animal Trap Restrictions Initiative, or I-777, a ballot measure that would have prohibited the use of cruel animal traps and snares on public lands. Although the initiative contained many exemptions, anti-trapping advocates knew they faced an uphill battle in a state with a strong hunting and trapping tradition that in 2004 approved a constitutional right to “harvest wildlife.” However, in light of the fact that advocates had tried unsuccessfully to get similar measures on the ballot in 2010 and 2014, the fact that they were able to collect enough signatures to get it on the ballot this year can be viewed as a hopeful sign.

Despite the mostly positive gains made on state ballot measures this election, many are concerned about what a Donald Trump presidency will mean for animals. Although President-elect Trump has not issued any official statements on animal protection, during his campaign he pledged to dismantle environmental protections and regulations, which could have far-reaching impacts on animals and their dwindling habitats. Trump does not have a voting record on animal protection—having never previously held political office—however, many of his likely picks for cabinet-level positions, including the Departments of the Interior and Agriculture and the Environmental Protection Agency, are sport-hunting enthusiasts and climate change skeptics, some of whom have demonstrated a pronounced antipathy to animal interests.

While the effects of a Trump presidency remain to be seen, we will fight to ensure the progress that has been made for animal protection will not be undone—and indeed will continue to move forward—no matter who sits in the Oval Office.