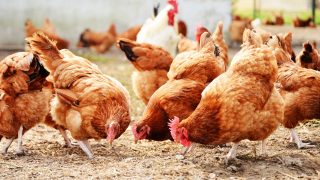 Michigan has become the fifth and largest egg-producing state to enact a “cage-free” egg law. On November 22, 2019, Michigan Lt. Gov. Garin Gilchrist signed Senate Bill 174 into law on behalf of Gov. Gretchen Whitmer. This law, which bans the production and sale of eggs produced by hens kept in cages, has a five-year phase-in period; all eggs produced and sold in the state must be sourced from cage-free operations by December 31, 2024.

Oregon, Washington, and California also prohibit the production and sale of eggs obtained from caged hens. In addition, Massachusetts has passed what is considered a “cage-free” law — although the legislation does not reference cages specifically, its minimum space requirements for hens, by the egg industry’s own definition, requires a de facto shift to cage-free housing.[1]

These laws all have phase-in periods of up to five years. Most recently, Oregon and Washington enacted bans in 2019 that become effective in 2024. Both of these laws were modeled on California’s Proposition 12, which was passed by voter ballot initiative in 2018 and phases out caged housing systems by 2022. Prop 12 updated legislation passed in 2008 — which mandated that hens must have enough room to extend their wings, stand up, lie down, and turn around comfortably — to add specific space requirements and the cage-free requirement. Though battery cages — the small wire cages that are industry standard, in which hens are crowded together so tightly they can barely move — would not have been lawful under the 2008 legislation, other types of cages could be used if they met the space requirement.

Two years after passage of the 2008 law, the California legislature also banned the sale of eggs produced out of state that were not in compliance with California’s requirements. California was the first state to enact such a sales ban.

In 2016, Massachusetts became the second state[2] to ban the production and sale of eggs obtained from hens who are intensively confined. Massachusetts’ law, passed by ballot initiative as Question 3, earning 78-percent support from voters, does not mention cages but specifies that hens must be able to extend their wings, which is defined as having 1.5 feet of floor space per bird. The other four states adopted guidelines set in 2017 by United Egg Producers (UEP) — an egg industry trade group — which recommend 1 square foot per bird.[3] Massachusetts’ law becomes effective in 2022.

Cage-free egg laws (which usually include space requirements for other species, including provisions against confinement of pregnant pigs and calves used for veal) have survived multiple legal challenges by the animal agriculture industry. Most recently, the North American Meat Institute (NAMI) filed a lawsuit to block California’s Prop 12, alleging it violates the Commerce Clause of the U.S. Constitution. NAMI’s request for a preliminary injunction to block implementation of Prop 12 was denied by United States District Court for the Central District of California in November 2019. The court also granted a motion by a coalition of animal protection groups, including the Animal Legal Defense Fund, to intervene in the case. In January 2019, the U.S. Supreme Court declined to hear a challenge of Massachusetts’ cage-free law brought by 13 agricultural states.

Michigan’s legislation was motivated in part by a changing market, which has been moving in a cage-free direction as a result of animal advocacy campaigns and shifting public sentiment.[4] Several large corporations, including McDonald’s, Walmart, and Costco, have announced in recent years that they will transition to using cage-free eggs within the next decade. As reported by the Grand Rapids Business Journal, bill sponsor Senator Kevin Daley said:

Michigan egg production is a $650 million business, and if the state did not establish new standards, egg farmers likely would go out of business or move to another state because of the commitment the marketplace has made to switch to cage-free housing standards by 2025, which would disrupt the economic impact egg production has on the state.

Michigan’s law updates legislation passed in 2009 that phased out battery cages. While the 2009 legislation required egg producers to, at minimum, replace battery cages with larger cages by 2020, it did not ban cages altogether. The new law does this, in addition to banning the sale of eggs produced outside Michigan by caged hens.

Receptivity to this type of legislation has shifted over the past decade with changing consumer demand. The Detroit News reports:

Daley voted against the legislation while serving in the House in 2009, but he said the market has since changed, with many retailers promising to sell only cage-free eggs by 2025. “The industry has moved forward and the marketplace is now demanding cage-free eggs,” he said. “It puts the producers in a position where they need to move forward.”

While the move to cage-free eggs is a clear trend, public perception may not mirror reality — meaning while people may want cage-free eggs, they don’t always understand what that term means.

Michigan’s new law defines a cage-free housing system as “an indoor or outdoor controlled environment for egg-laying hens in which the hens are free to roam unrestricted, subject to limitations,” such as exterior walls or interior fencing. Similar to other cage-free egg laws, it includes requirements that hens be able to perform natural behaviors. Hens must be:

Provided enrichments that allow the hens to exhibit natural behaviors. To qualify as a cage-free housing system under this definition, the enrichments used in the housing system must include, but are not limited to, scratch areas, perches, nest boxes, and dust bathing areas.

What Cage-Free is Not

It is important to note that “cage-free” does not mean “cruelty-free,” nor is it the same as “free range”— the term cage-free does not mean hens have access to the outdoors. Hens may still be housed in overcrowded conditions inside a barn or warehouse, albeit without cages, and never be allowed to go outside. The removal of cages is a step forward given that cruel battery cages — where hens are forced to stand on painful wire flooring for their entire lives — are still the industry standard, but “cage-free” systems are far from ideal and leave immense room for improvement.

Under cage-free housing systems, hens are typically still kept in tightly crowded conditions, which causes psychological stress and physical danger from hen-on-hen violence and stampeding behavior, in which hens die in “pileups.” Air quality in overcrowded barns is also poor. While “free range” is defined by the U.S. Department of Agriculture as requiring at least some access to outdoors, what that means in practice is variable. Outdoor access can be fulfilled, for example, by a tiny door leading to a small screen-enclosed porch with a roof and hard floors. It does not mean grass below or sky above — the likely scenario conjured in consumers’ minds by the descriptor “free range.”

The new crop of cage-free laws also follows standards set forth by United Egg Producers (UEP), a national trade group representing egg producers, which has caused some advocates to question how meaningful these changes really are. In reference to Washington’s new cage-free law, The New Food Economy reports:

Like many other labels used in food marketing, there’s no regulated, universally agreed upon definition for the term “cage-free.” Instead, both Washington’s bill and California’s initiatives were designed to reflect the 2017 cage-free guidelines established by United Egg Producers (UEP), a major lobbying group representing egg farmers. As such, both laws mandate, at a minimum, between 1 and 1.5 square feet of space per laying hen. . . . Both laws also require that laying hens have room to roam unrestricted and space to exhibit normal chicken behaviors, like dust-bathing, nesting, and scratching.

The fact that these laws are supported by the egg industry has created concern among some advocates that collaborating with industry has resulted in gains that are too modest. Critics rightfully note that these laws do not go far enough in improving the well-being of hens used for egg production — allowing them to remain in intensely overcrowded indoor warehouses. However, it would be difficult to argue that the battery cage standard, in which the vast majority of hens still spend their entire lives in a space so small they cannot spread their wings or perform natural behaviors, is better.

No matter what the housing system, hens are killed when their egg production declines. They are also subject to cruel but standard factory farming practices such as debeaking — which involves partial removal of a hen’s beak without anesthesia, and can cause acute and chronic pain. Debeaking is banned in some European countries but common practice in the U.S., and is done to mitigate injuries caused by close confinement.

While surveys consistently show that people are willing to pay more for products they believe are obtained from animals kept in less cruel conditions, the reality of what “cage-free” means is not always apparent. Further, companies that exploit animals often capitalize on this concern by deceptively labeling their products to mislead consumers into thinking that animals are kept in better conditions than they actually are. For example, pictures of hens on grass under sunshine appear on packages of eggs produced by hens who are never allowed outdoors and who will never see the sky until, perhaps, they are loaded from the building into the transport truck that will take them to their slaughter.[5]

Finding out what, if anything, is behind the increasing number of labels that make claims about the welfare of animals can be confusing, and busy consumers with competing demands do not always take the time to do their own research — in part because they trust these labels are regulated. Unfortunately, this is rarely the case.

Become an informed consumer! Even without active deception, labels pertaining to farmed animal well-being are in many cases meaningless. At best, they can be misunderstood by well-meaning consumers. To learn about the Animal Legal Defense Fund’s work to hold companies accountable in this area, see our resource “How False Advertising Lawsuits Help Animals.” For specific information on egg-labeling, see the Animal Legal Defense Fund’s “Egg Labeling Regulations Guide.”

Learn about farmed animals and the law and lobby for legal protections for these vulnerable animals. For tips on how to do this, see our resource, “Working with Legislators.”

[1] Some states, such as Ohio and Rhode Island, have enacted bans on battery cages without banning the in-state sale of eggs produced out of state using this method of intensive confinement.
[2] But Massachusetts was the first state to ban the in-state sale of products from pigs and calves confined to gestation crates and veal crates, respectively. California updated its law to include these animals with Prop 12 in 2018.
[3] Or, 144 square inches. Wire battery cages, which are still industry standard, allow approximately 67-86 square inches per bird.
[4] At least one state has gone in the opposite direction. In 2017, Iowa enacted a law that forces supermarkets selling “specialty eggs” — defined as eggs from hens housed in a cage-free, free-range, or enriched colony cage environment — to also sell “conventional” eggs (i.e. from hens confined in battery cages) if they participate in the federal assistance program known as WIC (the Special Supplemental Nutrition Program for Women, Infants, and Children).
[5] In 2018, the Animal Legal Defense Fund reached a settlement in a consumer protection lawsuit against Trader Joe’s for selling cage-free eggs in cartons with imagery misrepresenting the conditions in which egg-laying hens are confined. Trader Joe’s discontinued the use of the misleading packaging. In 2014, the Animal Legal Defense Fund settled a false-advertising lawsuit against Judy’s Family Farm Organic Eggs for using imagery on packaging that led consumers to mistakenly believe the hens had significant outdoor access. This company also changed its packaging as part of the settlement.