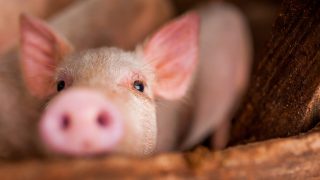 LOS ANGELES –  On Friday, a Central District of California court denied a motion for a preliminary injunction sought by the pork and veal industries, which would have stopped California’s landmark farmed animal protection law from going into effect. The court also ruled that a coalition of animal protection organizations may intervene in the ongoing case to defend the law.

In 2018, Californians voted to strengthen the Prevention of Cruelty to Farm Animals Act — taking a major step toward eliminating from the state market some of animal agriculture’s cruelest practices. The law, adopted by voters as Proposition 12 (or Prop 12), builds upon previous farm animal measures in the state to prohibit the in-state production of certain pork, veal, and egg products if they come from cruelly confined animals. Prop 12 sets minimum space allowances for those animals, and prohibits the sale of products that do not meet this humane standard. The initiative passed easily with 63 percent of the vote.

In its lawsuit, the North American Meat Institute (NAMI) contends the California law violates the U.S. Constitution’s Commerce Clause, attacking the state’s well-founded prerogative to protect animals and rid its marketplace of cruelly produced products.  In Friday’s ruling denying the request for a preliminary injunction, the court found that NAMI had not established that it is likely to succeed on the merits of its challenge.

The ruling also granted intervention to Animal Legal Defense Fund, the Humane Society of the United States, Farm Sanctuary, Compassion in World Farming USA, Animal Equality, and The Humane League, which collectively filed a motion opposing the preliminary injunction and supporting the state of California in defending Prop 12’s constitutionality and preserving California’s right to ban the production and sale of cruelly produced animal products.

Farmed animals are the most abused animals, routinely subject to abusive conditions but with few legal protections. Animals in modern agriculture are treated more as a commodity than living, feeling beings. When standard industry practices — which affect billions of animals — include confining animals in cramped crates and cages for the duration of their lives with barely room to move, let alone go outdoors or engage in natural behaviors, laws like Prop 12 make significant progress.