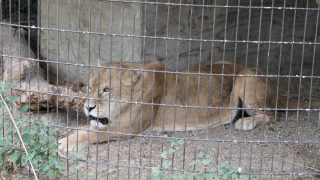 Cedar Rapids, IA — Today, the Animal Legal Defense Fund persuaded a federal judge to permit a veterinarian from the Wild Animal Sanctuary in Keenesburg, Colorado, to make an immediate inspection of two African lions at the Cricket Hollow Zoo in Manchester, Iowa.

The Animal Legal Defense Fund and five concerned Iowa residents have sued the zoo a second time under the federal Endangered Species Act (ESA), this time for harming and harassing African lions, which became federally protected only after the completion of the first trial.

The federal court in Cedar Rapids, Iowa, ordered this morning’s hearing after reviewing video evidence recently obtained by a visitor in which one of the zoo’s lions is thin, panting heavily, trembling, and unnaturally hunched. Pat Craig, director of The Wild Animal Sanctuary, indicated in a sworn affidavit he feared the lioness would not survive the summer without immediate veterinary intervention.

In a highly unusual move, the court likewise scheduled trial to begin August 1, just a week and half from today, citing the extreme urgency of the situation.

“Our primary concern is for the health of the lions,” says Animal Legal Defense Fund executive director Stephen Wells. “Due to our landmark ESA victory against Cricket Hollow Zoo in 2015, we are extremely optimistic that the lions will soon be out of danger.”