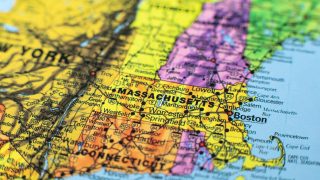 The Animal Protection Laws of Massachusetts compendium contains the general animal protection and related statutes for Massachusetts with an effective date on or before September 1, 2021.

An Act Addressing Investigations of Reports of Animal Abuse and Neglect (S.2672) is an omnibus animal protection bill that includes provisions to protect animals in four ways.
Take Action

An Act to Maintain Stable Housing for Families with Pets in an Economic Crisis and Beyond (H.1437/S.885) would help ensure that companion animals and their families can stay together both during and after the pandemic.
Take Action

Ask your state legislators to provide an opportunity for dogs and cats used in research to find loving homes once their time in a research laboratory has come to an end by supporting An Act Protecting Research Animals.
Take Action

An Act relative to pesticides (H.3991) would restrict the use of rat poisons (rodenticides) in Massachusetts by mandating an approach to human-animal encounters that minimizes risks to humans, wild animals, and the environment on public lands. Urge your legislators to support this bill.
Take Action

An Act Prohibiting the Sale of Fur Products (H.965/S.623) would ban the sale of new fur products, including clothing, fashion accessories, and home décor, in the Commonwealth. Urge your legislators to support this bill.
Take Action

An Act Relative to the Use of Elephants, Big Cats, Primates, Giraffes, and Bears in Traveling Exhibits (H.3776/S.2251) would prohibit the use of certain animals in circuses and traveling shows in Massachusetts. Urge your legislators to support this bill.
Take Action

An Act Protecting the Health and Safety of Puppies and Kittens in Cities and Towns, would protect animals and consumers by banning the sale of puppies and kittens under 8 weeks of age; prohibiting the sale of animals in parking lots, flea markets, and similar venues; and updating rules governing commercial kennels, among other improvements.
Take Action

Upgrading Standards for Hens Used by the Egg Industry (Massachusetts)

An Act to Upgrade Hen Welfare and Establish Uniform Cage-free Standards (S.2481)
Improves conditions for hens used by the egg industry by mandating that they be able to engage in certain vital natural and expands coverage to hens whose eggs are used for egg products commonly used by cafeterias and fast food chains
Read More

Promote Alternatives to Cosmetics and Product Testing on Animals (Massachusetts)

An Act Concerning the Use of Animals in Product Testing
Bill would require manufacturers and their contract testing facilities to use methods that replace animal testing of products and ingredients for cosmetics, household cleaners, and industrial chemicals.
Read More

Ensure That Dogs and Their Families Can Stay Together (Massachusetts)

An Act to Maintain Stable Housing for Families with Pets in an Economic Crisis and Beyond (H.1437/S.885)
Extends housing protections for families with companion animals during the COVID-19 emergency and prevents breed-related discrimination in housing and property insurance.
Read More

An Act Relative to the Use of Elephants, Big Cats, Primates, and Bears in Traveling Exhibits (H.3376/S.2251)
Prohibits the use of certain wild animals in circuses and traveling shows in Massachusetts.
Read More

Facilitating the Adoption of Dogs and Cats Retired from Laboratories (Massachusetts)

An Act Protecting Research Animals (H.901)
Requires dogs and cats at research institutions or product testing facilities be offered for adoption through a non-profit animal shelter or rescue or through private placement once the research ends, if a necropsy is not mandated
Read More

An Act Preventing Trafficking in Ivory and Rhino Horns (S.576/H.903)
Restricts the sale of ivory and rhino horn in Massachusetts.
Read More