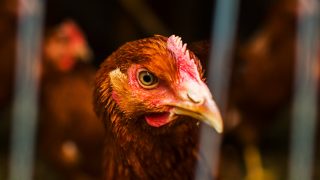 An estimated 9 billion land animals are raised and killed for food in factory farms and slaughterhouses every year in the United States. Despite their vast numbers, and the severity of the abuse they suffer, farmed animals receive only the most minimal protections by our legal system. In addition to animal cruelty, factory farming is polluting our environment and endangering public health.

Factory farms intensively confine tens of thousands of animals in dirty, stressful conditions—creating the perfect breeding ground for new deadly viruses. In the wake of the COVID-19 pandemic, it is more important than ever that we create a better future for animals and humans alike.

The Farm System Reform Act would overhaul the United States’ cruel and environmentally destructive animal agricultural industry, in part, by placing a moratorium on building or expanding the largest factory farms. Sponsored by Senator Cory Booker and Representative Ro Khanna, this groundbreaking bill would take the first step towards shifting away from our current factory farming model and toward a more sustainable agricultural system.

If you believe factory farming has no place in the United States, sign your name below!

Will you add your voice?

Billions of farmed animals suffer unimaginable cruelty in factory farms and slaughterhouses in the United States every year.

The factory farming industry is not only responsible for perpetuating horrific abuse, it is also a major contributor to the climate crisis and air and water pollution. Animal agriculture is a primary driver of climate change, accounting for 14.5% –18% of the world’s total greenhouse gas emissions. The enormous amount of animal waste generated by factory farms is polluting our waterways—killing wild animals, contaminating drinking water, and wiping out marine life.

The Farm System Reform Act would place a moratorium on the largest factory farms—immediately prohibiting the creation or expansion of large factory farms and requiring the cessation of such operations by 2040. It would also hold large factory farms responsible for their environmental impacts, restore mandatory country-of-origin labeling requirements for cow, pig, and dairy products as well as prohibit the U.S. Department of Agriculture (USDA) from labeling meat products imported from other countries as “Product of USA.”

We hope that you will support this important bill.