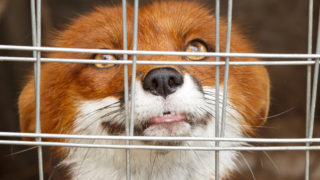 Banning the Sale of Fur (Massachusetts)

Bans the sale of new fur products, including clothing, fashion accessories, and home décor, in the Commonwealth

An Act Prohibiting the Sale of Fur Products (H.965/S.623) would ban the sale of new fur products, including clothing, fashion accessories, and home décor, in the Commonwealth. In 2019, California became the first state to ban the sale of new fur products. Wellesley passed the first-in-the-nation fur-free law outside of California in 2020. Fur bans are currently being considered in multiple state legislatures including Connecticut, Hawaii, New York, and Rhode Island.

On fur farms, animals like foxes and minks are confined to tiny wire cages for virtually their entire lives. Unable to engage in most of their natural behaviors, animals on fur farms routinely resort to self-mutilation, obsessive pacing, and infanticide. Undercover investigations on fur farms have uncovered egregious cruelty — including animals being skinned alive. To maintain the integrity of their skin and fur, animals on fur farms are usually killed via suffocation, electrocution, gassing, or poisoning. Sometimes, they are bludgeoned in the head or face repeatedly.

Whenever animals are intensively confined without regard for their health or welfare, public health is also endangered. Fur farms often confine thousands of animals to small barns or open-air cage systems. Sanitation is typically poor, and veterinary care is almost non-existent. As a result, these fur factory farms are breeding grounds for pathogens that can result in zoonotic diseases. Mink fur farms in the U.S. and around the globe have become hot spots for COVID-19. Minks are the only animal known to both catch the virus from people and transmit it to them. To protect public health, European governments killed nearly 20 million minks in 2020.