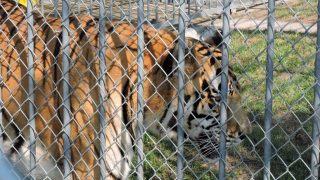 Students Speak Up for Tony the Tiger

Animal lawyers aren’t the only ones roaring about cruelty to captive animals like Tony the tiger. Kids care too. Tony’s plight—being confined at a Louisiana truck stop parking lot—and the Animal Legal Defense Fund’s ongoing legal battle to release him from that concrete nightmare got the attention of one awesome 4th grade class at Guilmette Elementary School in Massachusetts.

This spring, Ms. Buck’s 4th grade class used Tony’s cause to shape a persuasive writing and research project. Students were so excited about Tony, Ms. Buck says, the project “took on a life of its own.” Students created posters and circulated petitions as part of this project, and wrote letters to Louisiana Governor Bobby Jindal, asking him to take Tony’s suffering seriously.

During their research, the students learned about the Animal Legal Defense Fund… as they read articles about Tony in which you were quoted. They suggested that I forward a sample of their work to you directly because they believe you will be supportive of their efforts.

The Animal Legal Defense Fund is touched and inspired by the dedication of these young advocates. Their letters urge fairness and humane treatment of animals like Tony, and his release to a reputable sanctuary. They also make persuasive arguments backed up with at least three points of solid evidence to prove their points and maintain a truly fair and balanced tone, appealing to the governor’s ethical and responsibility.

In conclusion, we respectfully ask you, Governor Jindal, to do what is right and fair. Hear our voice.

Do you know how it feels to be locked up in a cage for 14 years? Tony does and that’s why I want Tony the Truck Stop Tiger to go to a sanctuary.

[Tony’s owner Michael Sandlin] is threatening Tony’s and the public’s safety by keeping Tony. … In fact, Michael Sandlin got written up for “unsanitary feeding practices” by the USDA.

Tony’s cage is like being locked up in jail.

As Matthew told the children, “support from people like you keeps my spirits up and helps me keep fighting for his freedom. Your voices join thousands of people who are demanding that Tony be sent to a sanctuary. Sometimes, if enough people raise enough of a ruckus, things can change for the better. You should be proud of your contribution (and thankful you have a teacher who encourages this kind of civic participation). I hope Tony will one day be able to breathe clean air instead of diesel fumes and hear the grass rustling in the wind instead of the idling engines of trucks. Thanks for helping get him a step closer to that day!”

This outstanding class inspires each of us to keep fighting to protect animals. As Matthew says, “even though these battles can be frustrating and slow, don’t give up. The animals are counting on you to speak up for them. Your voice has power. Use it!”