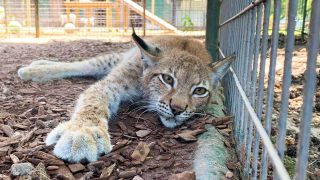 Graphic images of wound are posted on TikTok by an employee of Gator Park — a facility owned and operated by Jason Clay.

On November 9, 2020, an employee of Gator Park posted a TikTok video discussing injuries she sustained a few weeks earlier, after being attacked by an animal. The employee’s injuries indicate improper handling of animals by employees at Gator Park — handling which has led to aggressive behavior and therefore stress for the exhibited animals. During her employment at Gator Park, the same employee frequently posted videos of herself alone in cages with young tigers and lions and engaging in rough and aggressive play, as well as videos of improper fencing around the facility. The complaint asserts the employee’s improper interactions with the animals show not only Clay’s violations of Animal Welfare Act (AWA) regulations governing humane handling of exhibited animals but also his failure to abide by OSHA standards governing the safety of employees.

It is well established that employees who work in dangerous proximity to wild animals are at significant risk of serious injury or death. OSHA has recognized that the issue of workers exposed to large animals is a serious occupational health and safety concern and has taken action to correct and address those workplace hazards. Such was the case in August 2021, when OSHA issued a citation and notification of penalty against Pymatuning Deer Park in Jamestown, Pennsylvania for exposing employees to animal bite and scratch hazards.

“East Texas Zoo and Gator Park consistently fails to meet the minimum standards set forth in the Animal Welfare Act, according to USDA inspection reports. The injuries depicted in the surfaced video clearly shows employees are also in danger,” says Animal Legal Defense Fund Executive Director Stephen Wells. “It is simply a matter of time before the next — perhaps fatal — attack occurs. For the safety of the employees and the animals, we urge OSHA to respond to the seriousness of these violations and hold Jason Clay accountable for breaking the law.”

In January 2022, the Animal Legal Defense Fund submitted a complaint urging the U.S. Department of Agriculture (USDA) to investigate and enforce the AWA against Jason Clay after seven years of noncompliance with applicable laws — including the Endangered Species Act — as required to maintain a USDA exhibitor’s license.