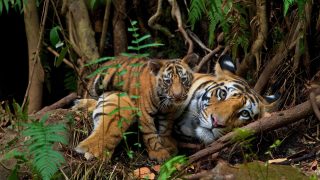 WASHINGTON, D.C. — Today the Big Cat Public Safety Act, (H.R. 263/S. 1210), which prohibits the private possession of big cats and makes it illegal for exhibitors to allow direct contact with cubs, passed the U.S. Senate. The bill now advances to President Biden for his signature, after passing the House of Representatives in July of 2022.

“Today the Senate took a major step toward protecting tigers, lions, and all big cats who have been vulnerable to inhumane treatment through a patchwork of private ownership laws across the country. The lack of federal regulations for big cats leaves first responders to situations involving animal escapes and the public at risk,” says Animal Legal Defense Fund Executive Director Stephen Wells. “We are encouraged to see support for the legislation from both chambers of Congress and hope the President moves quickly to sign this bipartisan bill into law.”

“The Big Cat Public Safety Act will end the horrific exploitation of big cats and bolster public safety,” says Senator Blumenthal “These beautiful but powerful predators deserve to live in the wild, not be kept in captivity for people’s entertainment — even as cubs. I’m thrilled that, after a groundswell of public and bipartisan support, this bill I’ve long advocated for will become law.”

While some states have restricted or banned the private possession of certain wild animals, other states have virtually no regulations, leaving big cats vulnerable to abuse. The Big Cat Public Safety Act closes this gap and also makes it illegal for exhibitors, such as circuses and zoos, to allow direct contact with cubs. Some facilities actually encourage visitors to interact with cubs, such as bottle-feeding tiger cubs, for an extra fee, endangering cubs and visitors alike. Cub attractions lead to perpetual breeding, to maintain tiny cubs while others grow too large to be handled and controlled. Aged-out cubs are often sold to private individuals or killed when they are no longer a source of additional income.