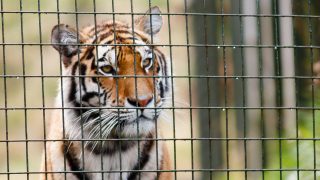 WASHINGTON, D.C. – Blackfish Director Gabriela Cowperthwaite has joined forces with national nonprofit Animal Legal Defense Fund in the launch of an online petition urging Congress to pass the Big Cat Public Safety Act — legislation that would help to end the rampant abuse of tigers and big cats across the country by prohibiting the private ownership of big cats, direct public contact, and dangerous interactions with big cats such as cub petting.

The petition reveals, “big cat owners and operations that breed tigers forcefully separate newborn cubs from their mothers – sometimes within minutes of birth – to use them in expensive photo opportunities with tourists. Because cubs can only be “handled” for a few months, drugging tigers to be compliant and docile is commonplace. When they get too old and their existence is no longer profitable, they are often irresponsibly sold into the pet trade or killed.”

“Documentaries can be powerful forces for change, sometimes through a call to action and other times simply by telling a story that entertains, creating a window into a world viewers weren’t previously aware of,” says Blackfish Director Gabriela Cowperthwaite. “But at some point, there is a pivot and the passion of their millions of viewers lands somewhere useful. Tiger King and its audience can do that now. The world of big cat captivity requires a call to action, and I’m encouraged that through this partnership with the Animal Legal Defense Fund and support for our petition by the entertainment industry, we may see enough pressure lead to the passage of the Big Cat Public Safety Act.”

“Netflix’s docuseries ‘Tiger King’ has become a cultural phenomenon since it was released and has made big cats — and those who abuse them — a popular topic of conversation,” says Animal Legal Defense Fund Executive Director Stephen Wells. “It’s important for us to move beyond the characters in the series and use this moment to put real pressure on our elected officials so meaningful change can be made to protect lions and tigers, and other big cats, many of whom are members of endangered species.”

The petition continues, “tigers and other big cats are apex predators who have complex physical and psychological needs and desires. Depriving them of expressing their natural instincts is inhumane. Keeping big cats in captivity in private homes or small cages creates an enormous public safety threat should these animals ever get loose.”

For more information on the petition, visit aldf.org/ProtectBigCats.