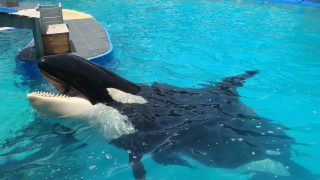 Many wild animals in captivity are used for “entertainment,” though some are also considered “pets.” Illegal trafficking in rare and exotic wild animals is a $10 to $20 billion-a-year business, the profits of which come at the expense of broken families and countless injured and/or dead animals.

Wild animals often suffer greatly in captivity because they are placed in utterly foreign habitats—obviously a metal cage and a concrete floor is unnatural living for virtually every species, but even changes in climate, topography, and flora and fauna can put wild animals under physical and psychological strain. Captive animals typically live much shorter lives than their wild counterparts: for example, captive orcas have about one-third the average lifespan as wild orcas, who can live to be more than 100 years old!

Furthermore, it establishes only minimal standards of care for licensing exhibitors. It does not restrict the display or private ownership of captive wild animals or prohibit the use of controversial bull hooks, whips, electrical shock, or other devices commonly used in circuses. The USDA inspects circuses as infrequently as once a year and local inspectors are often inadequately trained to look for signs of abuse and neglect.

The Convention on International Trade in Endangered Species of Wild Fauna and Flora (CITES) is an international treaty adopted by the U.S. in 1975 that regulates wildlife trade for all joined nations. It prohibits the trade in living or dead wildlife for some endangered species and bans the import of certain species for commercial purposes. The Endangered Species Act (ESA) protects fish, mammals, birds, and plants listed as threatened or endangered in the U.S. and beyond. It outlines procedures for federal agencies to follow regarding listed species, as well as criminal and civil penalties for violations. Neither law, however, directly addresses living conditions for captive animals.

Although strong state laws have been a useful way to protect exotic animals, some states offer little to no protection for captive wild animals. Some states require licenses, and others have bans on owning and displaying captive animals, but some have few guidelines at all. Some states ban the private possession of large cats, wolves, bears, dangerous reptiles, and most nonhuman primates. Illinois is the only state that prohibits circuses or any specific species from being involved in performances.

Increasingly, local jurisdictions are adopting ordinances that ban or restrict the display of captive wild animals, and some cities prohibit circuses. Local laws are often most effective in governing the private possession of exotic animals.

Animals used by the multi-billion dollar display industry—like those found at SeaWorld and the Miami Seaquarium — include orcas, bottlenose dolphins, and sea-lions. Orcas in the wild exist in tight-knit family groups and can travel over 100 miles in a single day, yet captive orcas are kept in small pools for entertainment in which they cannot dive and must swim circles in shallow tanks. No laws prohibit the display of orcas in captivity, and the Marine Mammal Protection Act (MMPA) allows the capture of wild orcas for the purposes of “education” and entertainment.

Many wild animals may be kept captive in private homes as pets. Common animals kept as pets include lions, tigers, cougars, ocelots, servals, wolves, bears, alligators, snakes, and nonhuman primates. These wild animals are dangerous by nature and cannot be domesticated. A largely unregulated trend is the hybrid breeding of wild cats with house cats, with predictably disastrous consequences.

Every year, thousands of animals enter the captive wild animal trade. These animals are either “surplus” from roadside zoos; captured from their native habitats; sold at auctions, pet stores, or over the Internet; or come from backyard breeders or the black market.

We have advocated for numerous captive wild animals, including:

NOTE: To help fund your event, your chapter can apply for a student chapter project grant.

Organize an information table on campus to raise awareness about issues relating to Captive Wild Animals. We can provide free tabling materials that include newsletters, stickers, brochures (such as our Captive Animals and the Law brochure), and posters to help with your event.

Host a speaker, debate, panel, or even a symposium or conference on issues relating to Captive Wild Animals.

When planning a speaker panel or other event, we encourage you to look for opportunities to team up with other student groups. This will bring a wider audience to your event. For example, on the issues relating to Captive Wild Animals, your chapter might pair up with the Environmental Law Society, the Entertainment Law Society, or the International Law Society.

Chapter members can write letters in response to any newspaper, magazine, or online article involving Captive Wild Animals and make the case against keeping wild animals in captivity.

At the administrative level, you can submit written comments to the U.S. Department of Agriculture, U.S. Fish and Wildlife Service, or other agencies when they are considering changes to rules and regulations. Stay up to date on new rules and comment periods.

Include news relating to Captive Wild Animals or your events on this issue in your chapter newsletters or emails. Check out Animal Legal Defense Fund’s press roomfor the latest updates on our cases and campaigns.

Organize your members to write letters and make follow-up phone calls regarding pending legislation in your state. Do you know who represents you? Find out, then write letters, send faxes, and phone them about pending local, state, or federal legislation. The best ways to reach your representatives are (in order of effectiveness): meeting them in person (at their office or a town hall meeting), calling, sending a written letter or fax, sending an email, and contacting them on social media. Hold a call-a-thon event at your school to encourage students to call in favor or against a bill. Attend a legislative hearing, trial, or a local Humane Lobby Day to meet legislators and talk about animal law issues. Check city and state government websites to stay up to date on current legislation, or contact us to see if there is pending legislation in your area.

For more tips on how to effectively contact your lawmakers, see this article from For All Animals.

Screen Unlocking the Cage for free! This documentary follows the Nonhuman Rights Project in its challenge to break down the legal wall that separates animals from humans. A Nonhuman Rights Project or Animal Legal Defense Fund staff member may even be able to attend and speak at the screening. If your chapter is interested in hosting a screening, please sign up here and email Student Programs Attorney Kelly Levenda for help promoting and organizing the event.

Other films to screen:

To request an Animal Legal Defense Fund speaker, please submit the form at the bottom of this page.

Please note: non-Animal Legal Defense Fund speakers may require honoraria, which we do not fund.