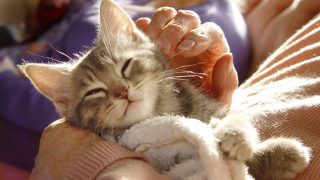 On July 22, 2019, Gov. Andrew Cuomo signed Senate Bill S5532B/AB 1303, which bans the declawing of cats in the state of New York. Effective immediately, anyone who performs an onychectomy, phalangectomy, or tendonectomy[1] procedure, with limited exceptions, on a cat within the state is subject to a civil penalty of up to $1,000.

A handful of U.S. cities have outlawed cat declawing, including Los Angeles, San Francisco, and Denver, but this is the first statewide ban.

Declawing is a cruel and painful procedure that can create physical and behavioral problems for helpless animals, and today it stops. By banning this archaic practice, we will ensure that animals are no longer subjected to these inhumane and unnecessary procedures.

Declawing is an invasive surgical operation in which the last bone of each toe is amputated — similar to severing a human finger at the top knuckle. The procedure is commonly performed for convenience rather than for the cat’s well-being. For example, many people have their cats declawed to prevent them from scratching furniture. Besides post-surgical pain and the inability to perform natural behaviors like scratching, there are other negative implications for well-being associated with declawing.[2]

The new law, which had bipartisan support, contains an exception for medical necessity. Declawing is permitted for “therapeutic purposes,” which includes the cat’s health but not “cosmetic or aesthetic reasons, or reasons of convenience in keeping or handling the cat.”

The Animal Law Committee of the New York City Bar Association (“City Bar”) supported the ban. It created a detailed report on the proposed legislation and the issue of cat declawing. According to the report, a reason for the City Bar’s support was that an earlier version of the bill had been amended to remove criminal penalties for violators:

In light of the City Bar’s position on mass incarceration, the Animal Law Committee felt that the bill must be amended to change the penalty for violation from a misdemeanor to a civil fine. The bill has been amended to remove the criminal penalty and also limited the applicability of the civil fine to persons who actually perform the procedure.

The report also cited the following as factors in the City Bar’s decision to approve the legislation:

The above study is one of the first analyzing the long-term health effects of declawing in cats:

The current study shows a clear association between declawing and the presence of deleterious side effects after the typical postoperative period in a comparatively large sample population. . . . This study found that declaw surgery in cats was associated with a significant increase in the odds of developing adverse behaviors, including biting, barbering, aggression and inappropriate elimination, as well as signs of back pain. (Martell-Moran, Solano, and Townsend 2017)

Cat declawing is illegal is most developed countries, but it is common practice in the U.S. and, until recently, Canada. However, the surgery has become increasingly controversial, and many veterinarians refuse to perform it on ethical grounds. Yet, veterinary medical associations in the U.S. have remained unsupportive of declaw bans.

Likewise, the American Veterinary Medical Association (AVMA) — a national nonprofit organization for veterinarians — does not support legislative restrictions on declawing. While its policy encourages veterinarians to educate clients about the “normal” scratching behavior of cats, it concludes “the decision to declaw a cat should be made by the owners in consultation with their veterinarian.”

VIN News Service further notes that while the veterinary community in the U.S. has tended to view declawing as a safe and reasonable way to manage cat behavior, the consensus is shifting. The following veterinarian, who no longer performs declaw surgeries, thinks change needs to come from within the veterinary profession itself:

“Twenty years ago, when I graduated, we were doing declaws with every spay,” said a veterinarian speaking on condition of anonymity. “…It was just an automatic thing we did, which is sad.” The veterinarian said her attitude about declaws changed when she considered how human amputees often experience phantom limb syndrome, the ability to feel sensations and even pain in limbs that no longer exist.

She hasn’t done the procedure in five years. “The more I wrapped my head around the fact that it was an amputation … I couldn’t do it anymore,” she said. “Bans get things done faster, but my hope has always been that if veterinarians just wrap their heads around this and decide that it’s not good for cats, we can stop it ourselves. If we’re offering declawing, we’re saying to the public, ‘It’s OK to do this.’”

Outside the U.S., declawing is less common and subject to more restrictions. It is illegal in most of Europe, as well as Brazil, Israel, Australia, and New Zealand. The UK, which banned cat declawing in 2006, may have done so in response to more Americans moving there. As reported by BBC News:

Attitudes differ widely across the Atlantic. While many European countries signed a treaty forbidding the practice in the early 1990s, an AP poll in 2011 found that 55% of US cat owners said it was OK to declaw their cats. Some studies suggest that between 20% and 25% of pet cats in the US have been declawed. By contrast, “declawing was always rare” in the UK, even before it was outlawed in 2006, says Prof Danielle Gunn-Moore, a vet and chair of feline medicine at the University of Edinburgh. “It was something we didn’t get taught at university. It became banned as more Americans came to the UK with declawed cats.”

While animals are legally classified as property around the world, this framework is particularly strong in the U.S, and is frequently invoked to oppose enacting stronger animal protection laws — the objection being that stronger protections will infringe on the right to do what one wants with their property. In the above article, BBC News quotes an observer:

“For Americans, it’s a matter of freedom and convenience – the right to the freedom to make decisions in terms of how you raise your cat, and convenience, because once you remove the claws, you don’t ever have to worry about you or the furniture getting scratched. By contrast, in the UK, any concerns for freedom and convenience are vastly dwarfed by concern to the welfare of the cat – it’s unthinkable to declaw cats in Europe.”

Although until relatively recently declawing was common in Canada, in contrast to the AVMA in the U.S., the Canadian Veterinary Medical Association (CVMA) in 2011 revised its position statement to clearly oppose declawing on ethical grounds, calling the surgery “unacceptable as it offers no advantage to the feline.” The statement also cites advancing scientific knowledge about the detrimental effects of this procedure on cats and alternative solutions drawing on advances in animal behavior.[4]

In addition to the CVMA denouncing the procedure, several Canadian provinces have banned elective cat declawing via their respective veterinary medical associations, beginning with Nova Scotia in 2017.

In the U.S., legislation often passes at the local level and “trickles up” to statewide bans. Two recent examples are circus bans and bans on the retail sale of animals in pet stores, each of which were passed by local jurisdictions across the nation before beginning to be enacted at a statewide level.[5] We are likely to see other U.S. states follow New York’s lead as the tide turns toward greater consideration of animals’ well-being and respect for their natural behaviors.[6]

Assemblywoman Linda Rosenthal, co-sponsor of New York’s declaw ban, told Politico: “New York State may be the first in the nation to ban cruel cat declawing, but we know it will not be the last. I am confident that this legislation will have a domino effect nationally.”

To learn how to pass a declaw ban or other animal-friendly legislation in your state or community, check out the Animal Legal Defense Fund’s resource, “Working with Legislators.” And tune into our free webinar, “Using Local Legislation to Protect Animals: Retail Pet Sale Bans,” which is part of our ongoing Animal Law Academy Webinar Series.

[1] Onychectomy is the standard method of declawing and involves the amputation of all or most of the last bone of each of the ten toes of the front feet, and the severance of the surrounding tendons, nerves, and ligaments. Phalangectomy is surgical excision of a phalanx (bone) of a finger or toe and tendonectomy refers to the surgical cutting of tendons.

.” Journal of Feline Medicine and Surgery. 1-9.

[4] “Much research has become available since we last examined this position statement and it is evident that felines suffer needlessly when undergoing this surgery as an elective measure. Furthermore, behavioural research has advanced to allow veterinarians in this field to help clients modify unwanted scratching behavior without the completion of an Onychectomy” (Canadian Veterinary Medical Association

[6] At least with respect to companion animals – farmed animals are routinely subject to painful bodily mutilations, for example having their testicles, tails, horns, beaks or toes removed without anesthesia.