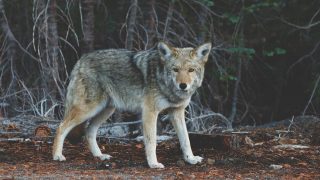 UPDATE: As of August 2021, eight states have passed legislation to ban coyote-killing (or other wildlife-killing) contests: California, Vermont, New Mexico, Arizona, Massachusetts, Colorado, Washington, and Maryland. Similar bills are pending in other states.

On April 2, 2019, Gov. Michelle Lujan Grisham signed Senate Bill 76, making New Mexico the third state to ban coyote-killing contests. This law, which went into effect July 1, makes it a misdemeanor to organize or sponsor a coyote-killing contest — defined as “a competition with the objective of killing coyotes for prizes or entertainment” — and a petty misdemeanor to participate in one.

New Mexico joins California and Vermont in outlawing these cruel events, in which armed participants lure coyotes to their deaths using decoy sounds. Attracted by the calling devices, coyotes are drawn into the open and subsequently shot. These contests, also called derbies, entice shooters by offering cash and other prizes to those who kill the most coyotes, the biggest coyote, the smallest coyote, and so on.

According to a legislative analysis, SB 76 was introduced in response to an uptick in coyote killings in New Mexico:

In 2015, 566 coyotes were intentionally killed with firearms in New Mexico and 69,000 were killed nationally. Advocates say 20 to 30 coyote-killing derbies are organized across New Mexico yearly . . . During a derbie [sic], contestants often use rifles with telescopic sights, shooting any coyote that is flushed out by dogs or comes to investigate calls that mimic wounded prey. Coyotes who are not killed, are often wounded and suffer. . . . Despite knowledge about the roles that all species play in healthy ecosystems, state wildlife agencies for the most part have kept mute.

Unlike the executive order, which applies to all wildlife, SB 76 only outlaws coyote-killing contests. Other animals targeted in such contests include bobcats, foxes, raccoons, crows, rodents, and wolves.

The new law and preceding executive order only criminalize killing coyotes as part of an organized or sponsored competition. It is still legal to hunt and kill coyotes — in most places, virtually without limits. Upon signing the executive order, Garcia Richard said:

This action does not restrict a rancher’s ability to humanely remove or kill an animal causing harm to agriculture or domestic pets on State Trust Lands. What we are addressing is the blood sport where participants kill dozens of animals without sound justification and play for cash and prizes.

Coyotes are generally subject to very few hunting and trapping restrictions outside of the competition context. In New Mexico, coyotes are classified as “unprotected furbearers” and “non-game species,” and a hunting license is not required to kill them, nor is there a “bag limit” restricting the number of coyotes an individual may kill. Additionally, hunting season is perpetually “open,” meaning coyotes can be killed at any time throughout the year.

Despite the fact that hunting and lethal management of predators remains legal in most cases  (subject to jurisdiction-based restrictions), wildlife-killing contests have come under increasing scrutiny as especially egregious instances of wanton violence against animals. Oregon, New York, New Jersey, and Arizona are currently considering bans as broad as, or broader than, New Mexico’s.

Critics charge that these contests are not only cruel but also ineffective. There is no scientific evidence showing killing contests control coyote populations and reduce depredation (the killing of farmed animals), which is the justification commonly given by proponents of the contests. To the contrary, research has shown that indiscriminate killing of coyotes and other “predator” species like wolves can in fact trigger long-term population growth and increase predation rates.

Through litigation, the Animal Legal Defense Fund has successfully challenged coyote-killing contests in Oregon and Kansas, and is working to stop a coyote killing contest in Wyoming, at which teams of hunters vie to kill as many coyotes as possible from sunup to sundown.

Read more about our work to end coyote-killing contests here.