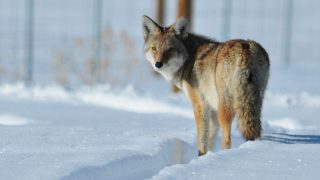 The Animal Legal Defense Fund also alleged that the killing contest qualified as a nuisance to the Western Plains Animal Refuge (WPAR) wildlife rehabilitators who spend money to treat and rehabilitate injured target and non-target wildlife every year. Rather than engage in a legal battle over the contest, the event’s organizer opted to settle. The victory marks the first time wildlife advocates have stopped a predator derby in Kansas.

The Smoky Hill Calling Contest, held in WaKeeney, Kansas, featured an entry fee of $80, and encouraged people of all ages, including children, to enter. The proceeds were designated to support local youth shooting sports, which disqualifies the bets for a charitable raffle exception. The contestant who killed the most coyotes would win $500 and a rifle.

Killing contests are cruel, inhumane and misguided attempts to reduce native wildlife populations who might prey on weak livestock. During the armed onslaught, pregnant mother coyotes are killed, pups are orphaned and packs are disrupted and displaced. Nevertheless, coyote populations almost always rebound when “teenaged” pups later have extra-large litters to make up for the pack’s losses.

Unfortunately, the young, new pack leaders are less experienced than their former alphas. The result is devastating to local ecosystems, as well as livestock populations.

“These contests are not welcome in Kansas,” says Brendon McCampbell, executive Director for WPAR. “We are happy this horrible event has been cancelled, and we hope others like it will also be ended soon.”

“These contests are simply about blood sport, not protecting ecosystems,” says Stephen Wells, executive director of the Animal Legal Defense Fund. “We’re pleased that WaKeeney’s coyotes will continue to hold their natural place in Kansas’ wilderness without the killing contest’s destructive and cruel interference.”