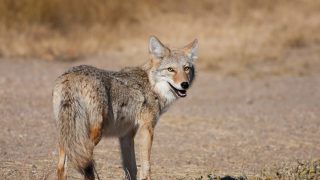 Reward for information leading to the arrest and conviction of the person or people responsible for illegally trapping a coyote in Essex County, Massachusetts

SWAMPSCOTT, Mass. – The Animal Legal Defense Fund, the nation’s preeminent legal advocacy organization for animals, is offering a $5,000 reward for information leading to the arrest and conviction of the person or people responsible for illegally trapping a coyote in Essex County, Massachusetts.

Officials say wild coyotes frequented an area next to a local golf course. It was near this golf course where a young, male coyote — about 5 months old — was caught in a Duke #160 Trap, which are illegal in Massachusetts. The coyote ran off after being trapped and it took authorities a few days to rescue him. When authorities finally rescued him, he was emaciated and suffered a broken jaw. In total, the trap was on his snout for about a week, which prevented him from eating. Unfortunately, the damage to his jaw was irreparable and he had to be euthanized.

“Much like the companion animals we consider family, wildlife animals are capable of feeling pain and deserve to be protected under the law,” says Animal Legal Defense Fund Executive Director Stephen Wells. “We commend the Swampscott Police Department for taking this case seriously and urge anyone with information about this crime to come forward.”

In Massachusetts, it is a felony offense to knowingly and willingly inflict cruelty to an animal. Under a recent amendment to the law, the maximum penalty for animal cruelty is seven years in a state prison or a fine of up to $5,000, or both.

If you have information related to this incident, please contact the Swampscott Police Department and Animal Control at 781-595-1111.