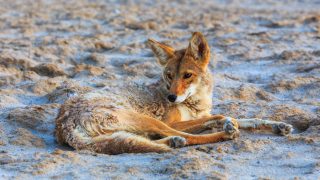 UPDATE: The Sweetwater County judge did not rule on our motion for a temporary injunction prior to the Feb. 3-4, 2017 event, so the hunt took place as planned. But the fight is not over—in fact it has only just begun. The Animal Legal Defense Fund will continue working to permanently cancel this annual event in Sweetwater County.

Complaint Alleges the Contest is a Public Nuisance

Rock Springs, WY — Last week, the Animal Legal Defense Fund filed a complaint on behalf of a Wyoming resident in an attempt to stop an upcoming coyote-killing contest.

The “Wyoming Best of the Best” involves teams of hunters vying to kill as many coyotes as possible from sunup to sundown. Non-hunting participants place bets on the teams they think will kill the most coyotes. The complaint alleges the event constitutes a nuisance in the form of illegal gambling, since participants wager money and the outcome is based predominantly on chance. Illegal gambling is a violation of the state nuisance statute, designed to prevent activities that put the moral integrity and safety of the community at risk.

The Rock Springs event is scheduled for this coming weekend, February 3 – 4, 2017. The rules encourage people of all ages and experience to enter, including children.

Wyoming Best of the Best involves betting opportunities for most coyotes killed, biggest coyote killed, littlest coyote killed, a rifle raffle, and a Calcutta—a form of betting pool where participants pick winners, and the pool of funds is distributed according to a prearranged scale of percentages, to those who selected winners.

The killing contest is not regulated by any government agency, hunting licenses are not required in Wyoming to kill coyotes, and there is no limit on the number of coyotes a hunter may slaughter. The plaintiff worries the influx of hunters, whose goal is to win cash prizes for the indiscriminate and uncontrolled killing of coyotes, will negatively impact Sweetwater County’s wildlife.

The contest also causes a serious disruption in the ecosystem leading to an unbalanced and unhealthy natural system. When coyote populations are disrupted by lethal means, younger pups have no adults to help them acquire food. This in turn causes many pups to prey on sheep and livestock. The disruption can also affect smaller predator populations by destabilizing entire ecosystems.