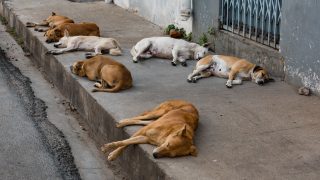 Animals have a right under law to be treated with compassion, respect and dignity. Animals are sentient creatures with an intrinsic value. Therefore, protection of such beings is the moral responsibility of each and every citizen including the governmental and non-governmental organisations.

The decision was part of a settlement that resolved a dispute between residents over the practice. The feeding of community dogs, who are prevalent in parts of India, is frequently a contentious issue. 1 Those opposed to the practice often cite public health and safety concerns, specifically fears of dog bites and the rabies virus.

The Delhi High Court’s decision and ensuing guidance represented a compromise between the two parties in the lawsuit, who had reached a settlement. While being clear that community dogs have a right to be fed, Justice J.R. Mudha also took into account the concerns of the opposing side by noting the  feeding of the dogs must be done in designated areas only and should not interfere with the rights of others:

Community dogs (stray/street dogs) have the right to food and citizens have the right to feed community dogs but in exercising this right, care and caution should be taken to ensure that it does not impinge upon the rights of others or cause any harm, hinderance, harassment and nuisance to other individuals or members of the society. (p. 79)

At least one commentator noted that the terms “harm, hindrance, harassment and nuisance” could create a significant loophole due to their vagueness. 2 What constitutes a legitimate nuisance or hindrance? Will such claims be exaggerated in an attempt to stop the feeding of dogs?

It remains to be seen whether these terms will become the basis for challenge. However, the reasoning adopted by Justice Mudha in determining that community dogs have a right to food was encouragingly animal-centric, which suggests any future claims made against the right of the dogs to be fed — and of citizens to feed them — will be scrutinized carefully.

Who is Responsible for Community Dogs?

In addition to finding they have a right to food, the ruling also ordered resident welfare associations (RWAs)3 to secure medical treatment for any street dog who becomes sick or injured. These organizations must also vaccinate and sterilize their community dogs to prevent “overpopulation,” noting that funds for this purpose can be obtained from the associations themselves or from other non-governmental organizations.

The vaccination mandate is important because, as noted above, much of the animosity toward community dogs — and toward those who feed them — stems from fears about the rabies virus, which is more prevalent in India than in the U.S.4

In addition, critics of the practice of feeding street dogs have noted that fulfillment of the dogs’ other needs is lacking. As one resident told The Guardian: “They are fed by dog lovers but no one takes responsibility for them.”

The High Court addressed this vacuum by placing responsibility for the dogs’ medical needs on the resident associations, which also must step in to feed the dogs if no individual caretakers are present:

It shall be the duty and obligation of every Resident Welfare Associations or Municipal Corporation (in case RWA is not available) to ensure that every community dog in every area has access to food and water in the absence of caregivers or community dog feeders in the said area. (p. 80)

So in addition to ruling that community dogs have a right to food, the court clarified whose duty it is to ensure this right is fulfilled.

“Sentient Creatures with an Intrinsic Value”

Included in the 85-page decision were written submissions by attorneys representing the dog feeder defendants, as well as amici testimony from dog experts. These submissions detailed — in admirably non-anthropocentric ways — the natural behaviors and habits of street dogs and, importantly, their value to the neighborhoods they inhabit. The testimony also included guidance for coexisting with community dogs, including ways to avoid triggering fear-based aggression.

A notable point made by Manisha T. Karia, counsel for the Animal Welfare Board of India,5 was that street dogs are subject to discrimination and negative stereotyping rooted in classism and colonialism —and that these pernicious perceptions can lead to violence:

A major reason for which stray dogs are discriminated against as compared to others and considered uncouth, unhygienic, or dangerous is because of human perception. This has largely been passed on to us by the British who discriminated against Indian/indigenous dogs to be inferior to other breeds brought in by them to increase their popularity. There is no intrinsic quality of stray dogs that indicates undesirability, it is largely stereotyping and classism, which further makes such dogs vulnerable to violence. (p. 21)

Justice Mudha echoed these animal-forward sentiments, writing: “The importance of street dogs in our community is of great significance.”

He then listed the positive roles performed by street dogs, including as 1) guards of the neighborhood who provide protection from outsiders; 2) community scavengers who also control rodent populations and thus help prevent the spread of diseases; and 3) companions who relieve stress for those who care for them.

In reaching his verdict, Justice Mudha drew extensively on statutory, constitutional, and case law in India,6 which together comprise a robust foundation for clarification of the rights of community dogs and their treatment as legal subjects. He concluded:

Animals have a right under law to be treated with compassion, respect and dignity. Animals are sentient creatures with an intrinsic value. Therefore, protection of such beings is the moral responsibility of each and every citizen including the governmental and non-governmental organisations. We have to show compassion towards all living creatures. Animals may be mute but we as a society have to speak on their behalf. No pain or agony should be caused to the animals. Cruelty to animals causes psychological pain to them. Animals breathe like us and have emotions. The animals require food, water, shelter, normal behaviour, medical care, self-determination. (p. 79)

Much is encouraging about these words. Particularly notable are 1) the explicit recognition that, as sentient beings, animals have intrinsic value; 2) that cruelty causes animals to experience psychological pain; and 3) that animals have emotions.

Along with basic needs for sustenance, shelter, and medical care, it is important that Justice Mudha includes “normal behavior” and “self-determination” among those things that animals require.

Enforcement: A Key Component of Rights

In addition to finding that community dogs — as sentient animals with intrinsic value — have the right to food, the High Court directly addressed the issue of enforcement. This is key because a positive ruling can falter without an effective means of implementation, leaving a critical gap between rights and their fulfillment.

To this end, Justice Mudha directed each resident welfare association to create an “animal welfare committee” to ensure both compliance with the law and harmony among residents:

AWBI [Animal Welfare Board of India] shall ensure that every Resident Welfare Association or Municipal Corporation . . . shall have an Animal Welfare Committee, which shall be responsible for ensuring compliance of the provisions of the PCA Act [Prevention of Cruelty to Animals Act] and ensure harmony and ease of communication between caregivers, feeders or animal lovers and other residents. (p. 81)

In addition to the role of resident welfare associations in ensuring compliance, Justice Mudha directed all governmental authorities, including law enforcement, to ensure caregivers of community dogs are left alone:

It shall be the duty and responsibility of the RWA or Municipal Corporation and all Government authorities including enforcement authorities like Police to provide all assistance and ensure that no hindrance is caused to the caregivers or feeders of community dogs. (p. 83)

The inclusion of a clear enforcement mechanism adds to the strength of the ruling.

Quoted in daily newspaper The Hindu, lawyer and animal activist Gauri Puri said that while laws and guidelines protecting the rights of community dogs in India do exist, their implementation and enforcement has been weak. She saw hope in this ruling however:

‘The judgment sets a much-needed precedent that strikes a defined balance between the constitutional obligation of the statutory authorities to protect community animals vis-à-vis the fundamental duties, moral and social responsibility of RWAs to ensure that statutory protection is provided to community animals,’ Ms. Puri said, adding that crimes against animals have substantially increased and most of these are against community dogs who do not have a permanent caretaker or owner.

Animal Rights via Human Rights? The Importance of Advocacy

An interesting aspect of this ruling is that it, in part, pits the interests of community dogs against a group of human residents and reaches a non-anthropocentric compromise. Rather than privileging the desires of the human plaintiffs, this ruling recognizes — and gives more weight to — the dogs’ right to be fed.

However, this case did not merely involve a clash of interests between humans and dogs. A determining factor was that the interests of the dogs were represented by another group of humans strongly advocating for them. Crucially, the ruling not only recognizes the rights of community dogs to food, but the right of humans to feed them. As such, animal rights and human rights are inextricably linked in this decision.

So the Hight Court was not only weighing the interests of dogs against humans, but also the conflicting wishes of two human groups, within the context of existing animal protection law in India, and with the interests of the dogs at the center of the dispute. This case illustrates the complex interplay of law and advocacy at the core of efforts to advance animals’ rights.

In the future, animals themselves may be classified as citizens7 — or as another legal status that clearly bestows crucial procedural rights like standing — but until then it is imperative for humans to speak out on their behalf in matters of law and policy. Without a dedicated and determined group of both laypeople and experts to persuasively advocate for the community dogs at the heart of this case — and a principled judge who took animal sentience and animal rights seriously — the outcome likely would have been quite different.8

In this landmark ruling, the Delhi High Court not only ruled that community dogs — as sentient animals with inherent value — have a right to food, but also issued detailed guidance for how this right will be realized. And the right is not merely passive, meaning that dogs have a right to be fed by community members who want to do so. There is an affirmative component as well: In the absence of individual caregivers, the ruling directs each resident association to take up the responsibility for feeding the community dogs in its area.

Additionally, the High Court goes beyond food to address other needs of the dogs. The ruling finds the resident associations are also responsible for taking care of the dogs’ medical needs should they become injured or unwell (a responsibility that legally belonged to no one prior to this ruling), as well as vaccination and sterilization to increase the well-being of individual dogs and allay public health concerns.

Further, the decision emphasizes the natural behavior of community dogs as a group, and how they should be interacted with as individuals, to maximize harmony and coexistence in multi-species communities where street dogs are present. As such, it is an encouragingly non-anthropocentric ruling that will add to the evolving foundation of animal law in India — and one hopes beyond as well.

UPDATE: In May 2022, the Supreme Court of India upheld the Delhi High Court’s ruling.