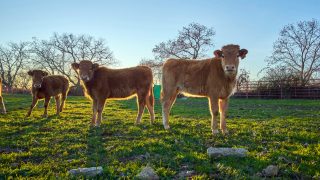 SAN FRANCISCO – The Animal Legal Defense Fund has filed a lawsuit against the California Department of Food and Agriculture (CDFA) on behalf of plant-based food producer Miyoko’s Creamery (Miyoko’s), after the agency sent an enforcement letter instructing the company to stop using terms like “dairy” and “butter” on its products — even with qualifiers like “vegan” and “made with plants.”

The agency also instructed Miyoko’s not to represent its vegan butter products as “cruelty-free,” despite plant-based products avoiding the cruelty associated with animal agriculture. The agency told Miyoko’s to remove a photograph from its website of a woman hugging a cow, as well.

The lawsuit, filed today, argues that the CDFA’s misapplication of federal regulations is an unconstitutional violation of Miyoko’s right to free speech. The agency’s action is an attempt to censor speech, violating the First Amendment by unconstitutionally restricting truthful commercial speech.

“The government has no business censoring humane companies from accurately describing their animal-friendly products,” says Animal Legal Defense Fund Executive Director Stephen Wells. “The California Department of Food and Agriculture should be at the forefront of efforts to shift away from destructive factory farming, not acting to stifle its competitors.”

The dairy industry claims that terms like “butter” and “cheese” on plant-based products confuses consumers, yet there is no evidence to support these claims. Moreover, animal agriculture causes immense animal suffering, pollutes the environment, and threatens human health and welfare.

The Animal Legal Defense Fund has been at the forefront of demanding fair oversight of plant-based foods, in the face of aggressive lobbying by animal agribusiness — which has attempted to strongarm state and federal lawmakers and regulatory agencies into prohibiting plant-based products from using commonly understood terms in their marketing and packaging.

Deepak Gupta from the firm Gupta Wessler is co-counsel in this lawsuit.