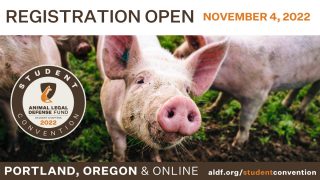 The Animal Legal Defense Fund Student Convention took place both online and in-person in Portland, Oregon, on November 4, 2022, before the Animal Law Conference. This one-day event provided an opportunity for law students to receive career advice from leaders in the animal law field. Participants also had a chance to network with law students from schools across the country.

This is your chance to ask questions and hear insights from leaders in the field of animal law! Panelists from varying backgrounds will share stories and offer their advice on how to do what you love in a way that you’ll love. This panel will rely heavily on questions from all of you, so get your questions ready! There will be an opportunity for networking with the panelists immediately following.

As the next generation of animal lawyers and policy makers, students are already doing great work exploring cutting-edge legal theories as well as considering practical ways to use the law to help animals. This year, the Law Student Scholarship Panel paired with the Animal Legal Defense Fund’s inaugural Student Scholars’ Workshop, which is an intensive year-long project. Five students were selected based on their proposals to research, draft, edit, publish, and present their papers on topics centered on farmed animals and natural disasters. During the AM and PM panels, hear from these students as they showcase this impressive work!