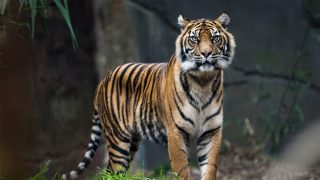 Madison, WI – Endangered tigers, Tanya and Teagan, are just two of the 200-plus animals at the center of the Animal Legal Defense Fund’s legal action against Special Memories Zoo, a roadside zoo in Greenville, Wisconsin.

Today, the Animal Legal Defense Fund, the nation’s preeminent legal advocacy organization for animals, sent notice to Special Memories Zoo declaring its intent to sue the facility for keeping the tigers and other animals in squalid conditions that violate the Endangered Species Act (ESA) as well as state captive wild animals, cruelty, and public nuisance laws.

Tanya and Teagan are kept in small, rusty cages at the zoo, where they are not provided the basic necessities of clean water, food, or straw. Witnesses observed the tigers’ water tanks full of algae, their food infested with maggots, and the tigers’ straw left soiled and unchanged for up to months on end. The Animal Legal Defense Fund is offering to transfer Tanya and Teagan, as well as the zoo’s 200-plus other animals, to reputable sanctuaries at no cost to Special Memories.

The Animal Legal Defense Fund will file a lawsuit if the owners continue to maintain the animals in illegal conditions and refuse to accept this offer.

“The Endangered Species Act and state cruelty laws exist precisely to protect animals like Tanya and Teagan from the suffering they experience at Special Memories Zoo,” says Animal Legal Defense Fund Executive Director Stephen Wells. “It is in the animals’ best interest to be placed in reputable sanctuaries where they can live in naturalistic environments, with clean food and water, and the medical and psychological care they require.”

Tanya and Teagan are not the only animals being kept in conditions that violate state and federal law. Visitors have observed other sick and injured animals held in cramped, filthy cages without access to clean water, as well. Ring-tailed lemurs have been observed without sufficient food or psychological enrichment. Endangered gray wolves are forced to live in small, muddy enclosures. Black leopards, lions, Canada lynx, Japanese macaques, and other animals suffer in similarly inhumane, unsafe, and illegal conditions.

The zoo’s problems have been documented by federal authorities. The U.S. Department of Agriculture (USDA) has cited Special Memories multiple times for Animal Welfare Act (AWA) violations, including for animals housed in polluted enclosures, for lack of drinking water, and for food contaminated with rodent droppings. An employee was bitten by a bear after improperly interacting with the animal, according to a 2016 USDA report. The USDA has also cited the zoo for not having enough trained staff.

The problems at the Special Memories Zoo are not unique. Roadside zoos dot the American landscape, able to operate due to lax enforcement of existing laws on both a state and federal level. The Animal Legal Defense Fund files lawsuits across the United States to protect animals held in captivity at roadside zoos, and advocates for stronger laws and better enforcement of existing laws.