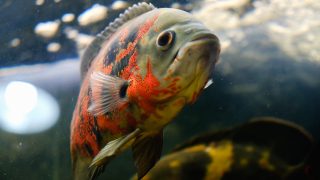 Animals are defined as “property” under U.S. law, which complicates efforts to advocate for them through the legal system. Property classification is not the only aspect of animals’ legal status that presents challenges. Also problematic is when animals are expressly excluded from the definition of “animal” under state cruelty laws, as this case illustrates.

In April 2019, a North Carolina man was arrested and charged with four animal cruelty misdemeanors — one count of animal abandonment and three counts of cruelty to animals — for failing to provide his oscar fish with food and fresh water and abandoning the animal in his home when he was evicted. The fish was malnourished, swimming in a dirty tank, and suffering from a parasitic disease when discovered by authorities in the abandoned residence.

While animal cruelty prosecutions involving fish are rare, Lt. Jerry Brewer, a spokesman for the New Hanover County Sheriff’s Office, said: “This is a life just like any dog or cat. If you harm or neglect an animal in New Hanover County, we are coming for you.” Authorities believe it was the first time a suspect had been charged in the county with cruelty over a pet fish.

The following week, however, all of the charges were dropped because according to North Carolina’s animal cruelty law fish are not “animals.” The state’s animal cruelty statute defines animals as “every living vertebrate in the classes Amphibia, Reptilia, Aves,[1] and Mammalia except human beings.”[2] Fish are not represented in these categories and are the only vertebrate class not included.

We take a very dim view of anyone who would abuse any creature great or small and appreciate [the Animal Services Division’s] enforcement of the laws to protect vulnerable animals. Fish are not included in this statute, however, so my office is dismissing these charges.

What is an “Animal”?

Despite the fact that they are living beings, animals are defined under U.S. law as property, which has been an obstacle to gaining recognition that they have basic legal rights. Animal cruelty laws are one of the few legal protections animals have that distinguish them from other types of property. However, some animals are not even granted the basic status of “animal” under the law, meaning they are generally excluded from even the elementary protections provided by animal cruelty statutes.

Animal cruelty laws are powerful tools to protect animals. But these protections are watered down in important ways, such as by exempting otherwise lawful practices that harm animals (e.g., farming, research, and hunting and fishing) and excluding entire classes of animals from the legal definition of “animal,” which leaves them with essentially no statutory protection from abuse and neglect.[3]

The statutory definition of “animal” under cruelty laws varies by state, and does not always adhere to commonly accepted biological and cultural understandings of what an animal is. There are a total of ten states that exclude fish from their statutory definitions of animals.[4] In addition to fish and other aquatic animals, farmed animals (or “standard,” “customary,” or “accepted” farming practices),[5] cold-blooded animals,[6] and wild animals[7] are sometimes excluded by definition from state cruelty laws. Other statutes are more vaguely worded and neither specifically exclude nor include fish and other animals;[8] other states provide no definition whatsoever.[9]

While there is no uniform definition of “animal” under state animal cruelty laws, the situation is not much better when it comes to federal animal protection laws (of which there are few). In addition, as with other animals, if fish are defined as animals at all, the cultural category into which they are placed matters: Being classified as a “pet” (versus “food” or “research subject”) will yield different levels of legal protection. As we have written in “Fins or Fur — How the Law Differs:”

It is now more or less indisputable that aquatic animals like fish feel pain and suffer as other animals do but have fewer legal protections. The federal Animal Welfare Act does not protect fish (or birds, farm animals, rats and mice bred for labs, and reptiles, among others). Fish are also not included in the Humane Slaughter Act or federal laws governing the treatment of animals used in research; not only that, but fish are not counted in the United States Department of Agriculture’s yearly report on animal usage in labs despite the fact that they make up an estimated seven percent of animals used in labs.

The fish rescued in this case was taken by authorities to a retail pet store called the Fish Room, where employees have been nursing him back to health with a proper diet and medication. One of these employees, according to the Washington Post, characterized oscar fish as “very trainable” with “huge personalities.” Oscar fish can live up to 20 years. The recently rescued fish is estimated to be about a year old.

It was a positive step that the sheriff’s office in this case brought cruelty charges involving a fish, but unfortunate that the district attorney’s hands were tied by North Carolina’s statutory definition of animal, which essentially erases fish and sends the message that their suffering isn’t relevant.

Indeed, fish are living, feeling beings — not essentially different from the animals who are protected by cruelty laws. Animal cruelty laws should be extended to apply to fish where they currently do not. There is no longer any doubt that fish are sentient. Substantial empirical research shows that they feel pain.[10] Therefore, at the very minimum fish should be recognized as “animals” under the law.

According to a study published in the journal Animal Cognition, “fish are seldom afforded the same compassion as warm-blooded vertebrates, in part due to the large gap between people’s perception of fish intelligence and the scientific reality.” This matters because public perception guides government policy. In reviewing the scientific literature, the author concluded that:

To learn more about the emerging field of aquatic animal law, tune into the Animal Legal Defense Fund’s free webinar, “Aquatic Animal Law: Overview, Aquaculture, and Alternatives,” on Friday June 14, 2019, from 12-2pm PT. It’s free to register but space is limited, so reserve your spot today! Lewis & Clark Law School is also offering Aquatic Animal Law as an online summer class for the first time this year. Class begins June 18 and is open to visiting and auditing students.

[3] In addition to excluding fish from the definition of “animal,” per NCGS § 14-360, North Carolina’s cruelty law does not apply to the following activities:

[5] Iowa, Nebraska and Texas exclude “livestock” from their definitions of “animal,” but have separate laws prohibiting cruelty to livestock. (IOWA CODE ANN. § 717B.1; NEB. REV. STAT. § 28-1008; and TEX. PENAL CODE ANN. § 42.092). The vast majority of states have an exemption for “standard” or “accepted” farming practices.